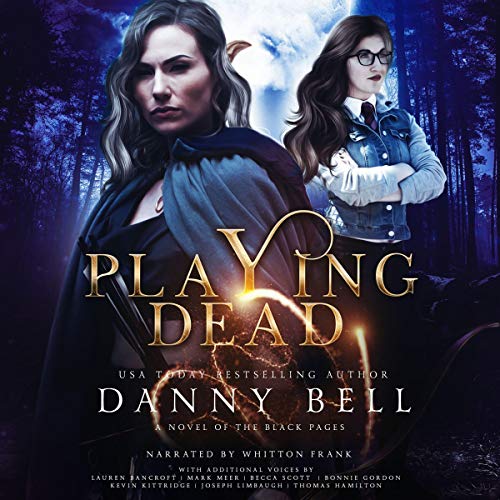 Her peace could never last.

It shattered when Chalsarda was confronted by the single worst person she had ever known; responsible for every painful memory in her long elven life, now he has poisoned her apprentice and taunts Chalsarda with the cure. If she hopes to save her friend, she must make a deal with the devil and capture a Battle Born. Dead or alive. Nearly indestructible and monstrously strong, stopping a Battle Born would be hard enough but the real problem? This one is innocent.

With no one to turn to and the fate of her companion in the balance, Chalsarda must survive a cunning cult leader, an inhuman assassin, and an enigmatic gunslinger, in her race to collect the coveted bounty. While Chalsarda is vehemently opposed to the task at hand, she’s faced with an impossible decision:

What listeners say about Playing Dead

A classic “action hero comes out of retirement for one last job” story with an awesome magical twist. A great mix of sincerity and comedy and it’s always a joy to read adventure books with a variety of badass women who actually have stuff going on besides punching good. A really charming voice cast as well!

Probably best to read the other books in the series first, but Bell explains the world clearly enough to still follow if you want to start here.

This isn't exactly a departure, but definitely an evolution for the series. The full cast is interesting, just as it is to hear Whitton Frank perform what was a side character in the last book as the main character for an entire audiobook,

In this installment, an elf who trained the series main character is given the spotlight for a one off, which gives the series some much needed breathing room. Chalsarda is presented as a complex character full of pain and hurt, and someone who is not prepared to deal with her past even as it comes crashing down through her front door. The change is perspective also gives this book a change in tone, though the narrative is still undeniably part of the larger series. While there are spots of introspection, the pace moves at a breakneck speed and the sense of danger is present throughout, as Chalsarda and Ann contend with a trio of deadly bounty hunters, a familiar villain from the series lore, and a sadistic wizard.

The spotlight really belongs to the cast, however, whose unique voices make this feel like an old time radio drama in the best ways. The additional voice talent really made the characters shine and feel important.

A worthy addition to the series.