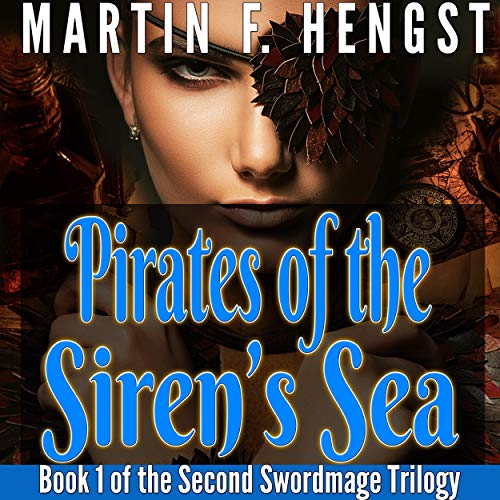 Pirates of the Siren's Sea

By: Martin F. Hengst
Narrated by: Jennifer Blom
Try for $0.00

What do you do when the people you trust the most betray you?

Tiadaria, the last Swordmage, was once one of the King's most trusted advisers. Now she's fallen out of favour and has been cast out of the realm she helped save from demons and dragons. When pirates start sinking ships off the coast of Dragonfell, Tiadaria offers her services to the realm, but the pride of Kings is not easily put aside.

Unwilling to let the Imperium fall, Tiadaria approaches the King's only daughter, a reclusive Princess unseen by the people for almost two decades.

What happens next is a race against time as Tiadaria and her allies commit an act of treason to stop a corrupt sorceress from endangering the fate of the world.

Only a Swordmage can turn an act of sedition into salvation for the Imperium in this rousing fantasy tale of swords and sorcery.

What listeners say about Pirates of the Siren's Sea

Fine alone, probably better as part of a whole

I was given this book for free in exchange for an honest review.

I don't fully agree with the negative reviews, but I get where they're coming from. Is the book perfect? No. And I haven't read the others, so I don't know if it would be better as a part of the bigger whole. Probably. Even still, it was a fun ride with interesting worldbuilding concepts.

I do agree that the MC was sometimes a little too juvenile to relate to as an adult reader, but I did like the villain.

Not a stand alone novel

This story was alright, but despite being book one of a series it referenced a lot of past history between characters that seemed as if it came from other books or something. It was frustrating as I often felt like I didn’t quite understand what the relationships were between characters. That being said the author is very skilled at building relationships between the characters, and it was fun to watch some relationships form over the course of the novel.

The entire novel felt like it was more of an exposition to the larger series and was not the most entertaining on its own, but rather slow at times. It is clearly setting up a story, but unfortunately I feel like it does so by sacrificing some of its own story potential to set up a larger narrative. The ending especially makes it clear that there will be more books as very little is resolved, and it is left feeling more incomplete than most books in series I’ve read that wrap up smaller narratives within larger narratives.

I listened to this as an audiobook, and as such I usually listened to it in bursts while doing other things. One thing that tripped me up often was that the main protagonist and antagonists had similar names (Tiodaria vs Tione or something like that) and I frequently got the names mixed up, further frustrating me at points in the story when there was a lot of interaction between the two characters.

The audio of the audiobook was okay but a few spots near the end that had some editing issues where the narrator either got cut off or faded out.

Pro: Interesting story. Nice love interest. Great descriptions of surrounding area etc.
Con: Main character and villain had rare names and both start with T’s so sometimes it made it hard to differentiate between characters. I don’t know if it was my glitch or the audio but somewhere around chpt 19 there is a glitch. Wish I understood the different creatures and types of magic before the read but once all the characters are introduced it does get easier to follow.

I enjoyed the story.

This is a book in the series "The Last Swordmage" - Goodreads and Amazon identify it as the fourth book; Audible and the author of this series identified it as the sixth book. It is not a standalone book and has a cliffhanger ending.

Here, Tiadaria, a sword mage, offers her services to the Princess [because she is out of favor with the King] when pirate ships are targeted and sinking jeopardizing the safety of the realm. Tione, with the help of the Sirens, is seeking the Black Horn, which Tiadaria tries to stop.

I didn't realize this book was part of a series when I requested it, but it is apparent once you start the book. There are multiple references to events and relationships - some of which the author provides a quick summary to catch you up or inform you, some he does not. I didn't feel lost for not having read the previous books but it would likely have enhanced my experience with this book. I liked the worldbuilding and the adventure/quest. However, it felt like this book is/was a setup for the continuation of the series - very little is resolved. Another problem I had was that Tione and Tiadaria's names are very similar when you are listening to a book - and a few times I was momentarily confused which character was involved or when they were speaking to each other. Overall, I really did enjoy the story, the quest and the characters. I found it to be very entertaining and fun. I will go back to find the previous books in the series before I move forward.

The narrator did a good job. My problem was with the recording - at times it seemed to fade out or there were parts which were recorded at a different volume and location which were edited into the book.

Betrayal is a hard pill to swallow!

This is the story about Tiadaria, the last swordmage who saved the Kingdom from dragons and demons. Even though she is hailed as a Hero, she ends up rubbing the Royal family wrong. So the King silently black lists Tidaaria and throws her out of the Kingdom.But Tiadaria is loyal to the Kindom and wants to see it prosper. When an uprising of pirates threatens coastline people, she comes to the rescue. I received this audio book for free in exchange for an unbiased review. Not bad at all!

Pirate's of the Siren Sea by Martin F. Hengst is a fantasy novel with some great ideas. I wanted to like this book but I couldn't and I really don't like giving bad reviews. I found myself finding the villain more interesting than the heroine which I don't think was the author's intent. Tiadaria seems too immature to be in charge of the expedition to capture the pirate, Tione. One moment she is upset when a man tries to kiss her then the next day she asks if he's only there because he was commanded to be there. She isn't interested in a relationship then she's telling him her entire life story in one night. She “storms” out or “stomps” off every other day. There is too much inner dialogue and contemplation especially when the characters are in a battle or about to fight. The inner angst seemed to be more like a pre-teen and it dragged the pace of the story down. I had a difficult time finishing. I think if I had been reading the book instead of listening, I could have skipped over certain parts.

The book itself has great ideas. The Sirens as a race of beings with their own cities, was a fascinating idea that could have been explored more, in my opinion. This is book six in the series and I think it's fine as a stand alone.

The narrator, Jennifer Blom was fine. She spoke clearly and was easy to understand. She successfully used small changes in voice to differentiate characters.

I received a free code to listen to this book and I did so willingly.

I am a sucker for a good pirate novel... and I must say this one exceeded my expectations. I enjoyed it immensely and I look forward to hearing more.