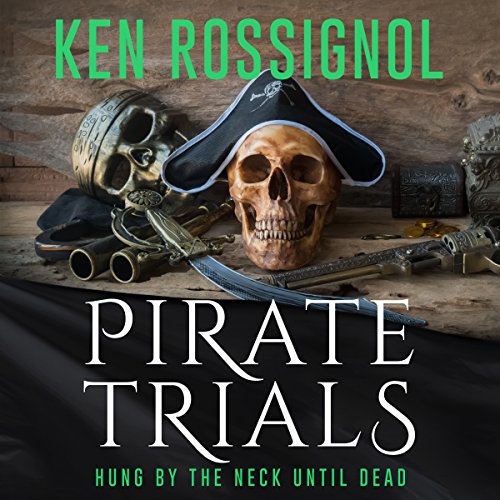 Pirate Trials: Hung by the Neck Until Dead

By: Ken Rossignol
Narrated by: Ray Montecalvo
Try for $0.00

Second in the series of Pirate Trials from news reports of the day and actual trial documents.

Join this bloodthirsty crew of pirates on ships, including their dying declarations of the most brutal and vicious deeds ever set upon innocent civilians and merchant-ship crews. The Demon Rum is cited as the chief cause by one pirate for his awful and murderous acts. Their day of reckoning came when they faced their final day of judgement when captured in Spain. When a crew of passengers leapt from their disguise to overpower a steamship after it left New York on a trip to Portland, Maine, the pirates claimed the ship in the name of the Confederacy, at the height of the Civil War! Learn what happened to the ship and the pirates.

What listeners say about Pirate Trials: Hung by the Neck Until Dead

The author of this book, Ken Rossignol, has done some great research and put together the transcripts of some very interesting Pirate court cases. It never really crossed my mind that a pirate could obtain treasure without the use of a sharp sword. Swindling, conning and forging can gather riches with Little bloodshed, at least, of the pirates' blood.until the judge pronounces the sentence. The other thing,I learned, is that piracy does not have to happen in the open ocean! Good collection of unusual accounts of pirate activities.

I enjoyed hearing the facts behind the atrocious acts of the pirates. Pirate Trials: Hung by the Neck Until Dead is an honest accounting of the trials of the pirates that is in depth and interesting. The details of the acts of these pirates take away a lot of the illusions I had about pirates. I did find the trial transcripts a little dry, but then again sometimes trials are a little dry.

The narration was rally nicely done. I enjoyed the way he presented the trial transcripts. I mostly enjoyed heating about the acts of the pirates as mean and horrible as they are.

The facts make the story interesting even when you get past the long verdict of the judge. That was the only part I did not enjoy. This is a good story for those that like real crimes and real verdicts.