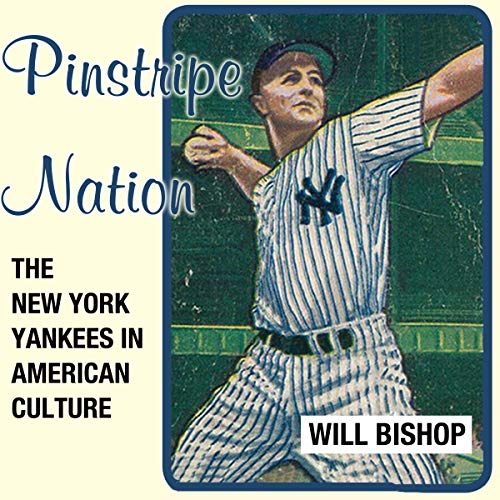 In Pinstripe Nation, Will Bishop explores the myriad of ways in which the Yankees and their successes (or spectacular failures) became interwoven with the nation's larger cultural narrative.

In 1920, with their acquisition of Babe Ruth, the Yankees rose to prominence. With his power-hitting style attracting legions of new fans, the "Great Bambino" became a national hero of the Roaring Twenties. In contrast to Ruth's flamboyance, his less flashy successors Lou Gehrig and Joe DiMaggio captured the spirit of striving and courage that carried America through the Depression and WWII years. The Pride of the Yankees, a popular movie celebrating Gehrig's career, typified the trend.

Mirroring the nation's postwar swagger and confidence, the club of the Mickey Mantle-era remained hugely popular, but "Yankee hating" set in as well. Novels like Mark Harris' The Southpaw and Douglas Wallop's The Year the Yankees Lost the Pennant signified a widespread resentment of the team's outsized dominance. Amid the national turmoil of the 1960s, the Yankees also went into decline. In the following decades, as player salaries soared and team infighting grabbed headlines, the once-glowing portrayals of the team gave way to tell-all books like Ball Four and The Bronx Zoo. Yet, as this informative and entertaining audiobook amply shows, the Yankees have, through all their ups and downs, retained a hold on the American imagination unmatched by any other sports franchise.

"The Yankees have connected with American culture for a century, and Will Bishop has done readers and fans a great service by documenting it all in one volume." (Marty Appel, author of Pinstripe Empire: The New York Yankees from Before the Babe to After the Boss)

What listeners say about Pinstripe Nation