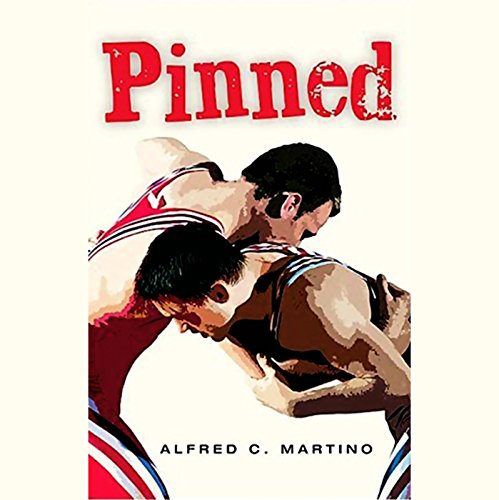 By: Alfred C. Martino
Narrated by: Mark Shanahan
Try for $0.00

Pinned follows Ivan Korske and Bobby Zane, two high school seniors, as they embark on the most important winter of their lives in a quest for the New Jersey state high school wrestling championship.

Ivan Korske is the pride of Lennings, a rural town tucked away in the farmlands of western Jersey, and the odds-on favorite to be crowned state champion in the 129-pound weight class. For Ivan, the stakes are impossibly high. A state championship fulfills a promise he made to his mother before she passed away nine months earlier and will, perhaps, stem his father's continued withdrawal from life. But mostly, Ivan dreams of getting a scholarship to a college far from his dreary hometown. To him, anything short of the title is failure.

In Short Hills, a wealthy town on the other side of the state, Bobby Zane protects his younger brother Christopher from the fallout of their parents' impending divorce, while searching for comfort from Carmelina Carrillo, a girl from a depressed part of Newark. Despite the distractions from the intense pressures of adolescent love and the family's breakup, Bobby realizes his quest for the coveted 129-pound state title may be his only hope for salvation.

Pinned chronicles Ivan and Bobby's season-long efforts toward overcoming forces within and beyond their control toward a title that only one of them can capture.

"A great show of the drive and intensity necessary to be a champion." (Rulon Gardner, U.S. Olympic Gold Medalist, Greco-Roman Wrestling)

What listeners say about Pinned

This was a fantastic listen. I have been involved in the sport of wrestling for over 40 years and this is, by far, the best fictional piece on our sport I have ever read/heard (Yes, even better than Vision Quest!). The technical description of the matches and the preparation for the matches was dead on. Aside from the wrestling the interaction between the characters and the everyday struggles the boys endure are common themes that everyone will be interested in. This is a must read for every wrestling fan and fun for everyone else.

I bought this book for my son who is a seventeen year old high school wrestler. It is a great book for any kid who is a wrestler and who is going through normal teenage problems. It is a little too heavy on the drama and I wish that it had had more action descriptions of the matches but it was very good. The big problem with the book is the ending. It was a terrible ending and left me very disatisfied.

Kept me following until. . .

Would you listen to Pinned again? Why?

I would listen to Pinned again, the story brought me back to high school so many years ago and yet seemed so relevant to what I imagine kids experience today. The end was a let down - spoiler alert - it leaves you hanging. That was quite a disappointment as I was really interested into learning how things turned out for these characters, if it hadn't been so well written up to that point I probably wouldn't have cared.

Pinned is a book about the high school wrestling scene however the messages and situations presented in this book are those that are part of the lives of most student athletes, regardless of their sport. The story is well read and the novel itself is fast paced and becomes more complex as the story progresses. If you have played sport or enjoy sport you will likely be able to relate to the issues that arise for the students in this novel.

I Could Almost Smell the Sweat!

I’m not a wrestler...my high school son is and in New Jersey, no less! I came across this book when I was looking for a book that he might enjoy! In the end, I, his middle aged mom, am the one who really enjoyed it (and I’m sure he will too when I get him to listen to it). All the descriptions are true to what I see my son experiencing. The narrator does a great job too of capturing the emotions and the turmoil of each of the characters. Some people complain about the ending but really there was no other way to end it.

Good book HORRIBLE ending!! Reminds me of the ending of the sopranos. Three more words required