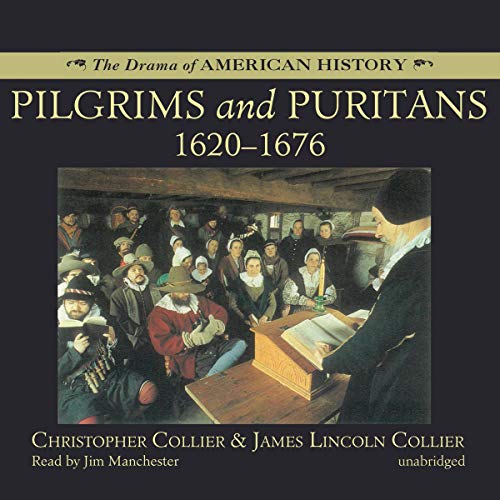 In Pilgrims and Puritans, the authors begin in the year 1620 in England and end in New England in the year 1676. The book recounts the religious, political, and social history of the Massachusetts Bay Colony and its influence on our lives today. The narrative follows various groups of settlers from their departure from England through arrival in the New World and their often violent conflicts with the native peoples of the Americas. The authors examine a number of issues that arose in the new society that was founded and the rise and fall of the "city on a hill."

History is dramatic - and the renowned, award-winning authors Christopher Collier and James Lincoln Collier demonstrate this in the compelling Drama of American History series aimed at young readers. Covering American history from the founding of Jamestown through present day, these volumes explore far beyond the dates and events of a historical chronicle to present a moving illumination of the ideas, opinions, attitudes, and tribulations that led to the birth of this great nation.

What listeners say about Pilgrims and Puritans: 1620-1676

TL;DR
A great beginning read that should be followed up on for a more wholistic understanding!

What was written:
The book states that it focuses on overarching themes and narrative, and it does this very well. The focus on storytelling is very well done and I recommend this as a good starting point for understanding the basic concepts of the period from the pilgrim and puritan perspective.

What was not written:
The book also states in the beginning that it is focused on the political and legal story of the time period, not as much the social. I also highly recommend, after reading this book, following it with other, more in depth, readings of the main figures and events as they relate to social evolution and the effects politics and laws had on various groups of people.

reading these series helps me understand our country more intimately and I so appreciate it!

useful as relates to today ...traditions we may take for granted, traceable and fascinating, history more dynamic than fiction

so over simplified as to be useless

This over simplified version of history omits so much that what remains is closer to misrepresentation than history. Do not waste your time or that of your children.

excellent brief history must read for everyone.

Thank you to the reader and the brothers who wrote and read these books for us to enjoy. Just Awesome. REAL HISTORY!

We need a Puritan revival

This country is lost and we really need a reform back to our Christian roots. Listen and learn!

in a nutshell, puritans brought greed, a fictional religion, witchcraft trials assabs executions, disease that wiped out generations of native Americans... yet, puritans and their laws and structures are to be cherished by us today. these blatant apologist statements at the end of the book simply followed the lack of details on native American genocide perpetrated by the colonists.

Listening intently to the formations of the arrivals of Europeans impact, influence and demise of the indigenous peoples of the North American continent. Nods today of use of adopted systems.