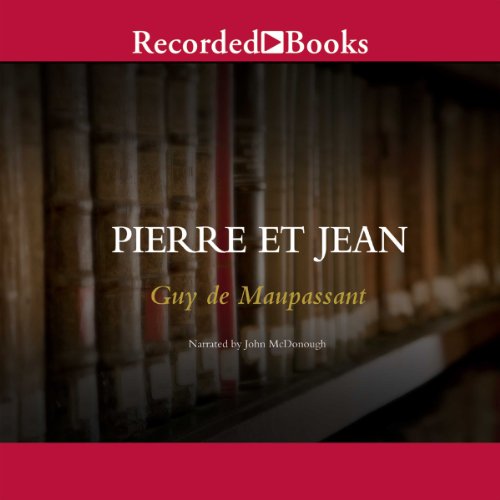 A vague jealousy, one of those dormant jealousies which grow up between brothers or sisters and slowly ripen till they burst, on the occasion of a marriage perhaps, or of some good fortune happening to one of them, kept them on the alert in a sort of brotherly and non-aggressive animosity. They were fond of each other, it is true, but they watched each other. Pierre, five years old when Jean was born, had looked with the eyes of a little petted animal at that other little animal which had suddenly come to lie in his father's and mother's arms and to be loved and fondled by them.

Jean, from his birth, had always been a pattern of sweetness, gentleness, and good temper, and Pierre had by degrees begun to chafe at everlastingly hearing the praises of this great lad, whose sweetness in his eyes was indolence, whose gentleness was stupidity, and whose kindliness was blindness. His parents, whose dream for their sons was some respectable and undistinguished calling, blamed him for so often changing his mind, for his fits of enthusiasm, his abortive beginnings, and all his ineffectual impulses towards generous ideas and the liberal professions. Since he had grown to manhood they no longer said in so many words: "Look at Jean and follow his example," but every time he heard them say "Jean did this - Jean does that," he understood their meaning and the hint the words conveyed.

I have yet to come across a Guy de Maupassant short story that I wouldn't give 5 stars (save the narration in certain collections) & his novel, Pierre et Jean, is no exception.

At the start of story, I was briefly worried John McD's slightly gruff sounding narration might be/become irritating, but less than 30 minutes in, that melted away.

Would you listen to Pierre et Jean again? Why?

No. But for a few of marked, eloquent passages.

In the end you know which son will have a life adventure and you feel sad but then feel it is best for him and it will all be right.

Have you listened to any of John McDonough’s other performances before? How does this one compare?

Of course, when the two brothers discover they have different fathers....and all that mess will bring...

Stay with the book although early on you look for the escape hatch...you will like it and you might find a piece of yourself in there!