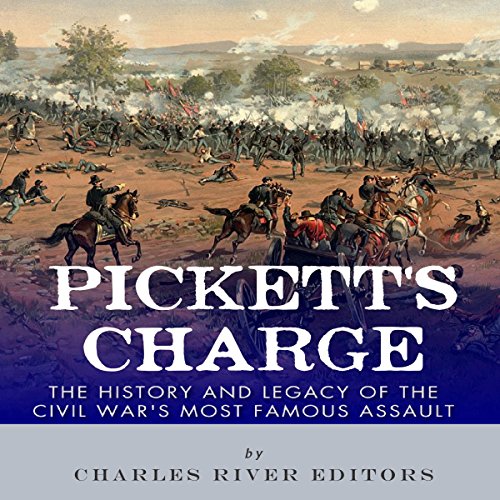 The History and Legacy of the Civil War's Most Famous Assault
By: Charles River Editors
Narrated by: Troy McElfresh
Length: 2 hrs and 30 mins
Categories: History, American
3.5 out of 5 stars 3.5 (11 ratings)

Despite the fact that the Civil War began over 150 years ago, it remains one of the most widely discussed topics in America today. Americans argue over its causes, reenact its famous battles, and debate which general was better than the others. Americans continue to be fascinated by the Civil War icons who made the difference between victory and defeat in the war's great battles.

The most famous attack of the Civil War was also one of its most fateful and fatal. Pickett's Charge, the climactic assault on the final day of the Battle of Gettysburg, has become the American version of the Charge of the Light Brigade. It is one of the most famous events of the entire Civil War.

Having been unable to break the Army of the Potomac's lines on the left and right flank during day two of the Battle of Gettysburg, Confederate Army of Northern Virginia commander Robert E. Lee decided to make a thrust at the center of the Union's line with about 15,000 men spread out over three divisions. The charge required marching across an open field for about a mile, with the Union artillery holding high ground on all sides of the incoming Confederates.

Though it is now known as Pickett's Charge, named after division commander George Pickett, the assignment for the charge was given to General James Longstreet.

This book warms up into a gem. It does a good job of explaining the great battle and how it was lost. Sad that these courageous men had to kill each other and a better solution than warfare could not be found.

Good book but too much prelude to Gettysburg & Pickett's Charge. A little longer & more detail would be nice.