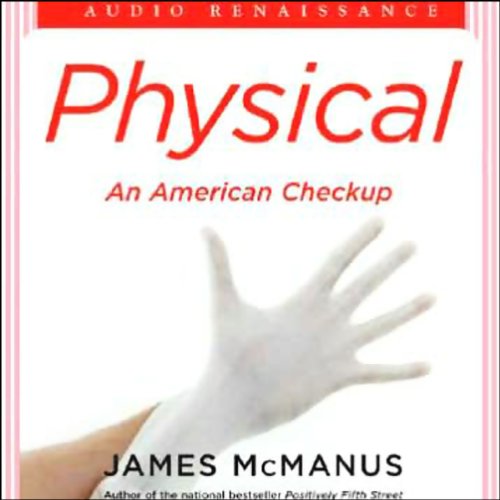 A wild ride through the dark heart of American health and health care, plus sex, drugs, and stem-cell wars.

Physical is the story of a hard-living, happily married, middle-aged American (the author) who gets a three-day "executive checkup" at the Mayo Clinic and is thereby forced to confront his mortality, not to mention glove-wearing doctors and the pair of dominatrix-esque technicians who supervise his stress test quite strictly. James McManus must understand his revised actuarial odds in the light of his not-so-long-lived forebears and the fact that his youngest children are only six- and five-years-old. He has to survive his own cardiovascular system, inherited habits, and genetic handicaps long enough to see Bea and Grace into adulthood. But with so much at stake, and in spite of his terror of death, he may not have the willpower to follow the Mayo clinicians' advice.

On a related health front, McManus' 29-year-old daughter, Bridget, has lived with juvenile diabetes since she was four, and the Bush Administration's opposition to the stem-cell research that could save her life makes him feel like he "might have to do something rash". Meanwhile, should he have a vasectomy? Or try for another child, having lost his only son? How much longer will he be able to perform such manly feats without Viagra? Is his grateful wife sleeping with the brilliant ophthalmological surgeon who saved their daughter's vision?

Physical negotiates the political and medical forks in the labyrinth of our health care system and calls for sanity and enlightenment in the stem-cell research wars. It's a no-holds-barred, wrenching, often hilarious portrait of the looming mortality of a privileged generation that can't believe the party's winding down, if not over.

I enjoyed this book. It sometimes got a little technical, but was very informative. Being the parent of an adult with juvenile diabetes, I feel this book brings forth and explains a lot of issues we face. Being the spouse of a fifty something male, I enjoyed the "physical" experience, while gaining valuable information!!

Just so much tripe and nonsense from a know-it-all left of center journalist. McManus should stick with poker and Vegas murders. I only wish I could get my money back on this one.

The description of this books sounds much better than the reality. The book quickly descends into shrill ad hominem attacks against most members of the conservative ranks. Unfortunately, this means the issues most interesting to me are given short shrift. Worse yet, although the author could not have known it at the time, his counter-example of the work done in Korea on stem cells has turned out to be fraudulent. Altogether, very disappointing.