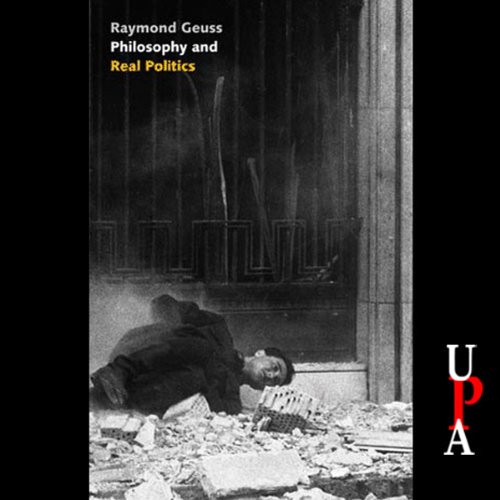 By: Raymond Geuss
Narrated by: John Lescault
Try for $0.00

Many contemporary political thinkers are gripped by the belief that their task is to develop an ideal theory of rights or justice for guiding and judging political actions. But in Philosophy and Real Politics, Raymond Geuss argues that philosophers should first try to understand why real political actors behave as they actually do. Far from being applied ethics, politics is a skill that allows people to survive and persue their goals. To understand politics is to understand the powers, motives, and concepts that people have and that shape how they deal with the problems they face in their particular historical situations.

Philosophy and Real Politics both outlines a historically oriented, realistic political philosophy and criticizes liberal political philosophies based on abstract conceptions of rights and justice. The book is a trenchant critique of established ways of thought and a provocative call for change. The book is published by Princeton University Press.

What listeners say about Philosophy and Real Politics

A concise and powerful criticism of ideal theorizing and moralism in political thought. Lots of delicious rhetorical ammunition in this one.

If you are reading (listening) this you probably know what you want from a text. I think it's good philosophy, illuminating. I really enjoy Geuss's work and wish more was on audiobook as well.
This particularly deals with why we might find a "real politics" useful and how we need political philosophy to enrich our understanding of the social climate.