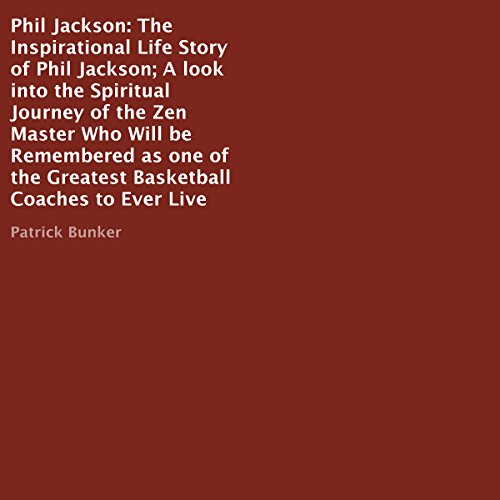 By: Patrick Bunker
Narrated by: Trevor Clinger
Try for $0.00

Discover the inspirational life story of Phil Jackson and learn about the spiritual journey that transformed him into a Zen master basketball coach.

Philip Douglas Jackson was born on September 17th, 1945 in Deer Lodge, Montana to Charles Jackson and Elizabeth Funk Jackson. Elizabeth came from a long line of Mennonites before her conversion to the Assembly of God. On Sunday mornings, Charles would deliver a sermon and Elizabeth would preach in the evenings. Charles and Elizabeth raised their four children, three sons and one daughter, in a remote part of Montana and did not allow dancing, rock music, or television.

His upbringing was modest as both his parents had taken a vow of poverty. Charles was described as being a man large enough to live his life on only $100 per week earned at the foot of the cross. He had a pleasant and laid-back personality until he needed to correct one of his children. He enjoyed hunting and fishing as did many others of his time. Elizabeth Jackson, mostly referred to as Betty, was proud and determined. She was sure that the second coming of Christ was right around the corner and that she, her family, and everyone she came in contact with, needed to be prepared. Betty was comfortable chopping wood alongside her husband and children, while also reciting scripture. Betty also had a strong, manipulative nature, which she often used to make sure her children were staying on the straight and narrow. Phil would inherit this talent from his mother, which proved useful in years to come.

What listeners say about Phil Jackson

Was the narrator a robot? Good content but needs a new narrator. Human being please!