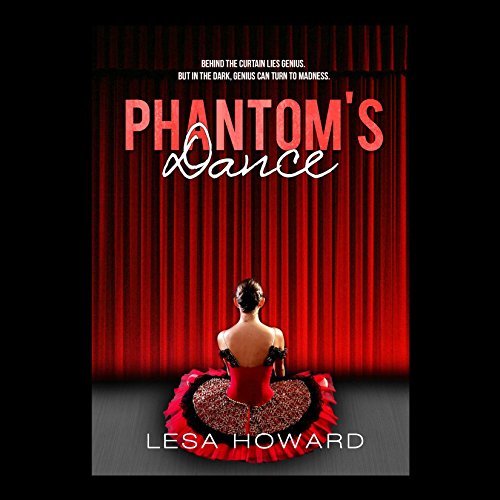 Christine Dadey's family uprooted their lives and moved to Houston for her to attend the prestigious Rousseau Academy of Dance. Now, two years later, Christine struggles to compete among the Academy's finest dancers, her parents are on the brink of divorce, and she's told no one about her debilitating performance anxiety and what she's willing to do to cope with it. Erik was a ballet prodigy, a savant, destined to be a star on the world's stage, but a suspicious fire left Erik's face horribly disfigured. Now, a lonely phantom forced to keep his scars hidden, he spends his nights haunting the theater halls, mourning all he's lost. Then, from behind the curtain he sees the lovely Christine. The moldable, malleable Christine. Drawn in by Erik's unwavering confidence, Christine allows herself to believe Erik's declarations that he can transform her into the dancer she longs to be. But Christine's hope of achieving her dreams may be her undoing when she learns Erik is not everything he claims. And before long, Erik's shadowy past jeopardizes Christine's unstable present as his obsession with her becomes hopelessly entangled with his plans for revenge.

YA Rendition Of Phantom Of The Opera With A Twist

Phantom's Dance is a dark cutting-edge version of the classic Phantom of the Opera set in the ballet world. I loved the whole aspect of the narrative. The cover is eye-catching and the synopsis is alluring. I absolutely loved this dark contempo version of Phantom of the Opera with a dancing twist that leaves you asphyxia. The narrative is enchanting, a sweet romance, brimming with twists, and an extra flair with the ballet aspect of it. Character's are compelling with complex personalities. The ending was fittingly chilling.

Kai Kennicott flawless performance brought this narrative to existence. Every character had its own voice which was easily distinctable. The tone and pace were smooth flowing and just right. Oodles of depth in her performance with sentiment.
I loved the music in the background as it accentuates the narrative as well as creates a illusion with the creepy factor. A flawless performance which illustrates her talent.

A dancing twist to Phantom

Where does Phantom's Dance rank among all the audiobooks you’ve listened to so far?

At the beginning there were a few moments where the narrator seemed muffled and hard to hear. But after the first chapter all was well. She did a lovely job with different voices to distinguish different characters. She had a young girl sound to her voice, it felt as if I was listening to Christine talk. She did a wonderful job of narrating the story and not distracting from it, but enhancing it.

What was one of the most memorable moments of Phantom's Dance?

Every scene surrounding Erik. I really like him and his relationship with Christine.

Which character – as performed by Kai Kennicott – was your favorite?

Christine! I loved her voice when I read this but somehow Kai Kennicott was able to add in an extra depth that I didn't achieve when reading the book.

There were just a few minor hiccups. The audio seemed to echo in some places. Other than that this was fabulous!

I'd recommend it to all audiobook fans!

Would you listen to Phantom's Dance again? Why?

So did I love the audiobook of Phantom's Dance? Of course I did! I'd recommend it to all audiobook fans, whether or not you have read the book before. I enjoyed it immensely and am even more in love with this dark Phantom of the Opera retelling

I would listen to it again because at moments it was thrilling, sweet, scary and funny. That makes a great (audio) book!

First of all, I don't usually listen to a lot of audiobooks but I do like to listen to them when they're favorite books of mine that I have read before. I don't think this review will be as long as my normal reviews because it's an audiobook and I have reviewed the story before but as far as audiobooks go, I personally think that this one was fantastic. And I'm not saying this because I loved the book when I read it. I really mean it. So, I still love the story. Still love this Christine that Lesa Howard has created, as well as Raoul. He's so adorable, isn't he? And so supportive of Christine. Going through the story again, made it stand out even more. I also ended up liking her parents more than I originally did. They do have their flaws but they were also really supportive of Christine in the end when she had horrible things happening to her.

What does Kai Kennicott bring to the story that you wouldn’t experience if you just read the book?

The thing with reading or in this case listening to a story you've read before is that the details are more clear. And also, with audiobooks they're even more clear and intense because you're listening to the story, to a voice telling it, which I love. Which brings me to the narrator. I loved all the voices she did with the story. They were all different from one another, so I think she did a fantastic job. Her voice as Christine and Van were probably my favorites. And Erik... Wowza. I was warned that his voice was creepy but I didn't realize how creepy until I actually heard his more intense scenes. I loved it and it impressed me because I've listened to audiobooks before where the narrator didn't do the voices as good as Kai Kennicott did. Oh and the music was brilliant. I loved the sweet music when it was a scene between Christine and Raoul. And of course the creepier music when it was a scene between Christine and Erik. That was brilliant!

Personally, it was a bit long to listen to all one one sitting. Audiobooks always take longer to listen to for me but the last 2 hours I did pretty much all in one sitting!