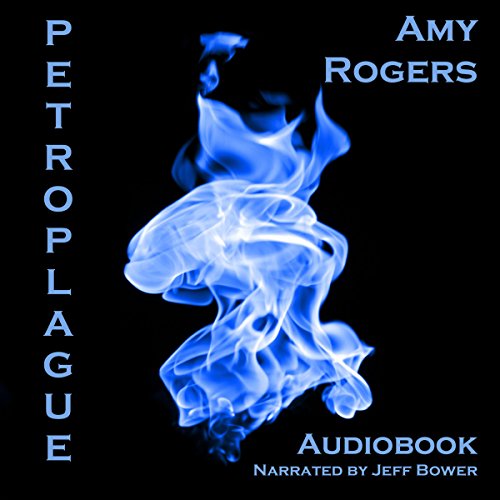 What if bacteria turned all the gasoline in Los Angeles into vinegar? Carmageddon doesn't begin to describe it; Petroplague does.

UCLA graduate student Christina Gonzalez wanted to use biotechnology to free America from its dependence on Middle Eastern oil. Instead, an act of eco-terrorism unleashes her genetically-modified bacteria into the fuel supply of Los Angeles, making petroleum useless. With the city paralyzed and slipping toward anarchy, Christina must find a way to rein in the microscopic monster she created. But not everyone wants to cure the petroplague - and some will do whatever it takes to spread it.

From the La Brea Tar Pits to university laboratories to the wilds of the Angeles National Forest, Christina and her cousin River struggle against enemies seen and unseen to stop the infection before it's too late.

Set in the mountain-ringed Los Angeles basin, this terrifyingly plausible science thriller about good intentions, unexpected consequences, Peak Oil, climate change, experimental biofuels, and the astonishing power of microorganisms will give you pause every time you fill up your car.

What listeners say about Petroplague

Petroplague is an interesting variation on the biodisaster theme of microbes eating oil. Scientists working on microbial remediation for hard to extract oil deposits are the unwitting target of ecoterrorists that results in bacteria consuming gasoline as well as oil in the ground underneath Los Angeles. Natural gas and coal can still generate electricity, but cars become worthless. To make matters worse, the the pressure buildup from underground munching microbes creates earthquakes. A young graduate students races against time to save LA.

The science elements are well done and solid; both the strategy for improving oil recovery as well as the potential solutions that are sought. It's the overall story that has major deficiencies: there is simply too little offered to make the action believable. Even though individuals right now are able to DIY natural gas conversions of vehicles, segways become the only option for police. Only a single scientist (and his graduate student) work on this problem and can't envision the PR nightmare ahead. With LA quarantined, the US president can only offer food drops. One phone call from a biotech official about "having the cure" has the mayor offering assistance (as if no one else would be making similar claims). One phone conversation with an accusation of murder brings an immediate arrest warrant. One phone call initiates an arrest while there's a suicide victim hanging in the backyard. Finally, the slow crawl to the climax is one unlucky escapade after another. While the sci-fi elements are great and the overall plot is sound, there is simply too little flesh on the bones to make this a meaty morsel.

Finally, the narration is exceptionally suboptimal. The reading pace is slow with unacceptably long pauses between chapters. There is a severely limited range of voices with females performed especially poorly. To infuse some distinction, there are nasally renditions and almost comical accents that convey inappropriate impressions of the characters.

Yes I would. I will admit that some of the science went over my head but it was an enjoyable listen.

The mayor was pretty cool.

The narrator tried too hard on the female voices.

There were several action scenes that were riveting. For instance, the scene in the police station where one of the good guys is in a handcuff chain with a bunch of bad guys. The chase scene with the police on Segways chasing an eco-friendly experimental car that only goes about 25 mph was funny.

I could not get passed the bad narrating to listen to the book. Deleted it.

I found this book looking for something to read after Suarez' Kill Decision, and as such, I found it suitable and enjoyable.

The premise seems original and interesting, and the characters become more likable and less prone to making the reader despair as the story moves along and they accept the situation and its gravity. Petroplague makes good use of my beloved LA and gives you the feeling it couldn't easily have been set "wherever." There are a few occasions where between natural flow of narration / dialog and cramming in as much info as possible, the author seems to choose the latter, but since it's interesting information, I can live with that. My only criticism would be that the helicopter pilot should possibly have been a separate character (phrased this way to avoid spoilers); the way it stands feels a bit forced.

Interestingly, one thing that occurred to me was that the body count seemed so low for the genre that the story could almost pass for YA/children's. (An observation, not necessarily a criticism.)

From a feminist viewpoint, we get a competent heroine, and none of the important characters bore us with sexist dialog. SPOILERS: There is no sexual assault, but the threat thereof is implied at various points as order in the LA basin deteriorates. Your call whether you find that to be triggering, or interfering with your enjoyment / relaxation.

The reader is OKish, but I prefer other male readers' renditions of female voices.

I expect to buy more books from this author if and when they become available as audiobooks.