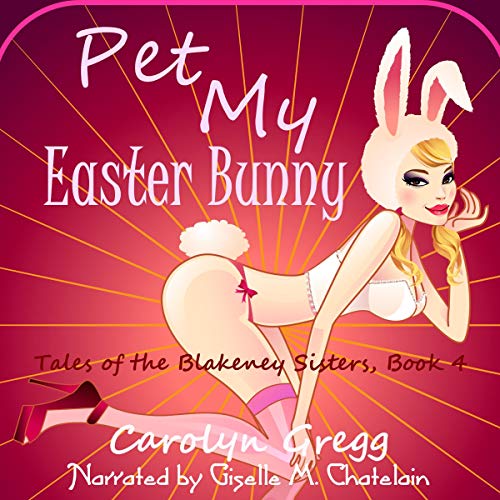 Once upon a time, there lived a man with five rambunctious daughters. They were an average American farming family except for one minor detail. The man was a warlock, and all of his daughters were witchlets - half witch and half human.

Rast Clemmons is the most arrogant, opinionated, and snobbish son of a bitch Penderly Blakeney has ever met. The fact that he is also her new boss only makes matters worse. With Easter and her birthday just around the corner, Penderly knows beyond a doubt that her heart's call works at the seafood plant. It's only a matter of time before she discovers who he is, and they seal their future together with the sex hex test.

But first she has to get rid of Rast Clemmons, who is quickly becoming a major pain in the ass. Regardless of the outcome, that man has screwed up her life for the last time, and now she's ready to call for magical reinforcements.

What listeners say about Pet My Easter Bunny

This is a different holiday story of another one of the Blakeney sisters, who are witchlets (half witch/half human). This story was really good and, although the same type of story as the other books, it was different. I really enjoyed this book. Giselle M. Chatelain did a good job with the narration. I received this free copy audiobook at my request and have voluntarily left this review.

Would I listen to it again: probably
Did the story keep me engaged: reasonably
Was I invested in the characters: reasonably
What did I like about the story? entertaining enough for the shortie it is. There's a fair bit going on and it could have been longer.
Narration comments: Narrator has done a good job with the story, each character's voice is distinct and the rhythm and intonations all work to bring the story to life.