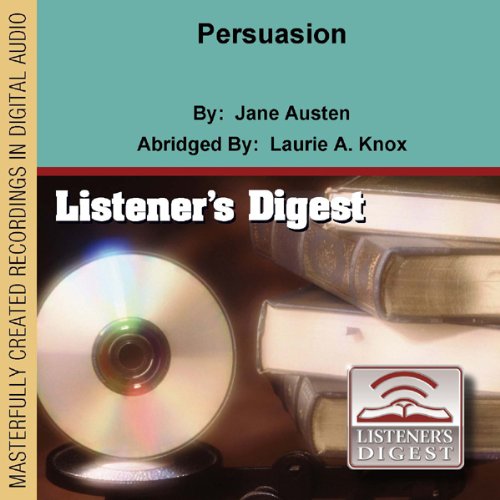 By: Jane Austen
Narrated by: Cathy Ritchie
Try for $0.00

Jane Austen's last novel Persuasion was written in 1816 and was published posthumously in 1818. The title was not chosen by Jane Austen; some have said she meant to call this The Elliots. Her brother chose this title.

In the novel, Anne Elliot, the heroine Austen called "almost too good for me", has let herself be persuaded not to marry Frederick Wentworth, a fine and attractive man without means. Eight years later, Captain Wentworth returns from the Napoleonic Wars with a triumphant naval career behind him, a substantial fortune to his name, and an eagerness to wed. Austen explores the complexities of human relationships as they change over time.

What listeners say about Persuasion

just didn't get the meat of the storyline

What disappointed you about Persuasion?

the story line didn't capture what Austen was writing about.

What was most disappointing about Jane Austen’s story?

The performance was fine

don't try to rewrite a classic