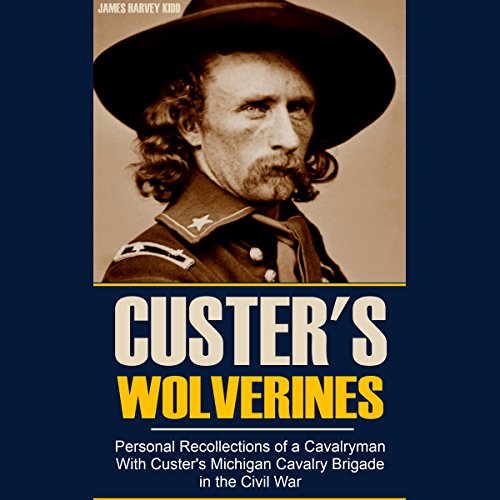 Envision 10,000 mounted men of one of the best cavalries the world has ever produced strung out along 13 miles, marching around Robert E. Lee's right flank, taunting JEB Stuart to come out and fight. In one of the most thrilling and detailed accounts of one of the most important battles of the American Civil War, James Kidd tells this story and much more of the Michigan Wolverine Cavalry under the command of George Armstrong Custer.

The popular image of General Custer, James Kidd wrote in 1908, is incorrect. He was not reckless or wasteful of men. The battle was Yellow Tavern, part of the Spottslyvania fight, and Phil Sheridan later said he believed it was the greatest cavalry engagement of the Civil War. JEB Stuart was fatally wounded in the fight.

At Gettysburg, Brandy Station, the Trevillian Raid, Kilpatrick's Richmond raid, and the Shenandoah Valley, the Wolverines played a crucial role in the Union victory. Kidd also provides wonderful details about the movement of large cavalry units, especially when they must be turned in battle. In one of the best-written memoirs of the Civil War, Kidd has presented a picture of the Michigan Cavalry and its unforgettable leader that helps complete the image of Custer as a soldier.

This is for the Civil War Enthusiast

I only managed to get half way through this book. If you are looking for information and recollections of Custer, you will not find many here. The book is full of troop movements, even the battles sound like movements on a parade ground. Such personal stories as their are, are delivered as the whole book is, in a matter of fact, monotone and hesitating way that I found it impossible to get into this story. You could really do with a map handy to follow the movements too. For the real enthusiast it maybe an informative book, otherwise I would pass it by.