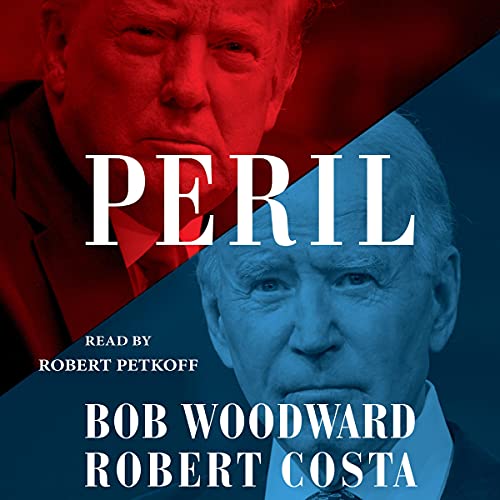 By: Bob Woodward,Robert Costa
Narrated by: Robert Petkoff
Try for $0.00

The storming of the Capitol on 6 January 2021 revealed the transition from President Trump to President Biden to be one of the most dangerous periods in American history, with the result of the election called into question by the sitting president.

But, as internationally best-selling author Bob Woodward and acclaimed reporter Robert Costa reveal for the first time, it was far more than just a domestic political crisis. At the highest level of the US military, secret action was taken to prevent Trump from possibly starting a war.

Woodward and Costa interviewed more than 200 people at the centre of the turmoil, resulting in a spellbinding and definitive portrait of a nation on the brink. They take listeners deep inside the Trump White House, the Biden White House, the 2020 campaign, and the Pentagon and Congress, with vivid, eyewitness accounts of what really happened. Peril is supplemented throughout with never-before-seen material from secret orders, transcripts of confidential calls, diaries, emails, meeting notes and other personal and government records, making for an unparalleled history.

It is also the first inside look at Biden’s presidency, revealing the background to his controversial decision to leave Afghanistan. He took office faced with the challenges of a lifetime: dealing with the continuing deadly pandemic and its crushing economic impact, all the while navigating a bitter and disabling partisan divide, and the hovering, dark shadow of the former president. ‘We have much to do in this winter of peril,’ Biden declared at his inauguration.

Peril is the extraordinary story of the end of one presidency and the beginning of another. The culmination of Bob Woodward’s best-selling trilogy on the Trump presidency, along with Fear and Rage, it is an essential book for anyone wanting to understand this tumultuous period.

What listeners say about Peril

Woodward and Costa are brilliant

This is an excellent piece of investigative journalism. Bob Woodward does not rest on his laurels. He and Robert Costa shine a bright and thoroughly forensic light on the events of January 6th 2021. They present their evidence and draw appropriate, yet uncomfortable, conclusions. This is a book for serious scholars and neophytes alike. It will prove incendiary to the far right, who will not be able to offer a different narrative without bending or destroying objective reality.

Trump is a failed dictator

Scary listening! Trump is everything he is accused of being. Let’s hope he is never allowed to return to the White House!

Entertaining but not as thorough as usual

I thoroughly enjoyed the first two Woodward books on Trump. This book returns to some of the themes included there - for example unelected officials seeking to thwart the will of the elected President. In the first book it was Gary Cohn ducking and diving to avoid withdrawal from the Trans-Pacific Partnership. In this, the equivalent is General Mark Milley, chairman of the Joint Chiefs. His conversation with Nancy Pelosi are the big revelation, at least for those of us outside the USA.

Beyond the role of the military - and no one does a character study the way Woodward does - the events of 6th January have been covered repeatedly in many other books and there’s little new that this study adds. The way Trump treats his subordinates, the way he demeans, insults, seeks to bully, praise and wheedle all as methods of control, are very firmly on record.

After January 20th the book turns to the passage of the American Rescue Plan Act (the coverage here could have been taken wholesale from the New Yorker; conservative Democrats from West Virginia are conservative, Republicans are prepared to hold the government hostage, shocker) and the withdrawal from Afghanistan. The latter was looked at superficially, in my view. It relives media coverage and comments made publicly at the time, with only sporadic insights into the private conversations of President Biden and the other key players - which is something Woodward usually excels at.

I enjoyed it, for sure, but Woodward has done much, much better work.

This is a shocking book. More shocking than the disgraceful narrative is that a very substantial minority of the American people applaud this monster and would welcome an authoritarian anti-democratic regime firmly under his iron grip.
This book and its earlier volumes needs to be read and its warning heeded.

I thought I had read/listened to more than enough about the ex-president, through books and newspaper articles. Thought I would lightly skim through’Peril’ but found it riveting from beginning to end. Extremely well put together and presented. Recommend it to all who want to understand a little more about current American politics.

Once you hear this book..you can't unhear it

Woodward and Costa present a rather chilling tale of two parties...and the courage of one man

It’s more than a Trump hit-piece

Not quite as purely ‘orange man bad’ as you may be expecting. Sure Trump and his staff come off as badly as you’d expect, however there are times when I feel they go easy on some of his GOP supporters, although this may be in an effort not to pontificate. The stories about Trump himself are probably the most interesting parts, he appears weak, panicked and oblivious that everyone in his party is using him to secure their own future. In fact if he weren’t the harbinger of modern fascism then you could almost feel sorry for him at times. Almost.

The book fauns over Biden too much in places, sure he’s the lesser of two evils but a lot of his well known shortcomings and past transgressions are either omitted or quickly skimmed over.

Overall it’s worth giving this a listen if you’re interested in any way in American politics. What it really hammered home to me is that across the political spectrum there are people doing whatever it takes and making deals with whatever devil offering them the most power and financial security at that moment in time.

how could an electorate vote in someone so obviously incompetent into the highest office in the world? how was he not impeached for the insurrection of Jan 6th? this book shows the hastened decline of America as a superpower, led by a coterie of predominantly very old, very white men. at least Biden seems like a human being with feelings but he's way too old to be leader. there should be an upper age limit and whilst the checks and balances worked to keep Trumps attempt at stealing the election, he nearly orchestrated a coup . just shocking and the bloated old member of the 1% is going to run again in 2024.

1) Trump. what a disgusting specimen of the human race
2) it seems to layout by accident almost all the faults with American politics, on both sides and in their conjunction.
3)Quite an interesting display of American exceptionalism in face of so American exceptions

Trump is the baddie. Biden is the goodie. That's all there is to it.

I don’t know how they did it but I felt like a fly on the wall during a tumultuous for years.

A well researched and fabulous read. The title is very apt and the thought of Trump regaining the Presidency in 2024 should worry the world.

Can't wait for the fat loser to lose again