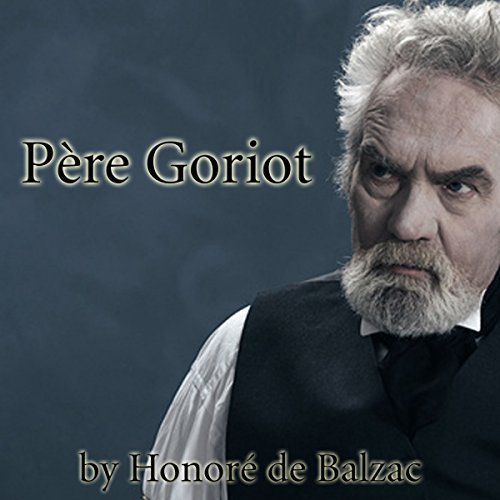 By: Honoré de Balzac
Narrated by: Walter Covell
Try for $0.00

One of the greatest of French novelists, Balzac, trained as a lawyer, was a great judge of human nature. In 1833 he conceived the idea of linking together his novels so that they would comprehend the whole society in a series of books. This plan eventually led to 90 novels and novellas (including more than 2,000 characters) that he called "The Human Comedy". Balzac's huge and ambitious plan drew a picture of the customs, atmosphere, and habits of bourgeois France. Among the novels of The Human Comedy is Le Pere Goriot, considered by many to be his highest achievement. Balzac's many masteries all find their fullest expression here.

The novel was written when Balzac's genius was at its height and when the his physical powers were not as yet impaired by his enormous labor and reckless disregard for his health. The history of Goriot and his daughters, the fortunes of Eugene, and the mysterious work of Vautrin, not only receive due and unperplexed development, but work upon each other with correspondence and interdependence that forms the rarest gift of the novelist. Nowhere else is Balzac's charm presented in a more pervading and satisfactory manner than in this novel.

This text was translated by Ellen Marriage.

What listeners say about Pere Goriot

A wonderful novel, read in a plummy accent appropriate to the era.

Balzac is a master storyteller.
Ranks with the Russian Great Writers.

This is an old books on tape reading with a very rough and ready fellow reading without rehearsal and often at cross purposes to a character's sentiments. One actually hears him slowing down when encountering difficult passages. In the final scene, when the eponymous character is raving in agony and psychological turmoil, the reader performs as though Goriot were a shopkeeper who had been asked his opinion about the most recent recession. The story is good, but the translation is so wooden that the characters read like emotionally challenged robots.

this is actually a really good book

this is actually a pretty good book. it's sad but good. what love will do

Balzac, French author early 19th century, was the father of realism and "Pere Goriot" is one of his masterpieces (he wrote over 90 novels). Oscar Wilde said of Balzac that he created the 19th century. Sadly, the English translation used for this reading is from the 19th century and is a very poor translation. I listned to %25 and gave up in a dispair of incomprehension and bought the Norton Critical Edition, a recent and aclaimed translation that captures the essence of Balzac. Recommend the book highly.

Having just finished Les Miserables which I loved, I thought I'd go for another old French book. Well I hated Pere Goriot. Listened to 2 1/2 hours and then gave up. Lots of characters and Balzac TELLS you about them. He does not show you their character by describing their lives (as Hugo does so memorably). And therefore there is not much dialogue. All the characters jumbled together for me and in the end I just didn't care.

Tremendous tale of woe as Goriot's daughters display utter lack of feeling as they exploit their father's love.
A picture of the preoccupations of 19th century France and the development of Rastignac from innocent youth from the country to would-be city sophiticate. How does his integrity survive the temptations of worldly success?
Walter Covell's reading is, sadly, desultory at times which spoils the atmosphere which Balzac creates so masterfully.

Pere Goriot offers fascinating insights into social turmoil in early 19th Century France. Balzac's "realist" style contributes to great descriptions of life at various levels of French society and the venality of its citizens. It's a pretty bleak indictment of institutions such as marriage and none of the characters have any redeeming features. It's supposed to be based on King Lear but there's no Cordelia! The reading is quite weak and the dialogue comes across as wooden.