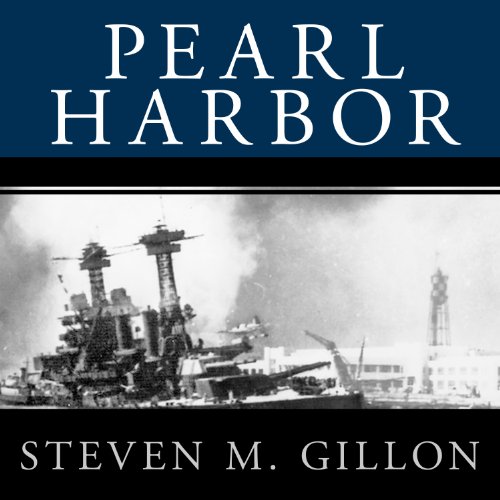 Franklin D. Roosevelt famously called December 7, 1941, "a date which will live in infamy." History would prove him correct; the events of that day - when the Japanese bombed Pearl Harbor - ended the Great Depression, changed the course of FDR's presidency, and swept America into World War II.

In Pearl Harbor, acclaimed historian Steven M. Gillon provides a vivid, minute-by-minute account of Roosevelt's skillful leadership in the wake of the most devastating military assault in American history.

FDR proved both decisive and deceptive, inspiring the nation while keeping the real facts of the attack a secret from congressional leaders and the public. Pearl Harbor explores the anxious and emotional events surrounding the attack on Pearl Harbor, showing how the president and the American public responded in the pivotal twenty-four hours that followed, a period in which America burst from precarious peace into total war.

"Pearl Harbor is a first-rate book by a fine historian. Steven Gillon, closely describing FDR's reactions to the Japanese attack, reminds us of the shrewdness and skill of Roosevelt's leadership. Both erudite and fast-paced, this is a book for scholars and general readers alike." (James T. Patterson)

How everything became suddenly very simple

This is not a particularly enlightening book, but with its moment by moment recital of the events in and around the White House at that wrenching moment in history, it does make clear how all the political skirmishing and hostility of the preceding months suddenly became inconsequential in the face of the Pearl Harbor debacle. FDR's ability to read the American will correctly at that moment and his decision to deliver a simple address informing the country of the seriousness of the attack and expressing the nation's resolve seems like the obvious choice now, but Gillon makes it clear that the President's advisers pressed for the kind of extended historical diatribe which would have diminished the clarity and power of the speech. We are left with an image of a president perfectly attuned to the task of leading a unified nation into the conflict.

There is little else of significance in Gillon's account. The biographical material about FDR's struggle with polio and the unraveling of his marriage does little to shed light on his initial response to the crisis in the Pacific, and notes about the scramble to establish a new security environment for the White House do not add much to our understanding of the crucial events of the day. As I listened I found myself waiting for more momentous revelations, but they never came.

Some of my favorite reads are books that select one sliver of time, a single, crucial historical event, and delve into all its’ aspects. An extreme example is George Stewart’s Pickett’s Charge: a micro-history of the final attack at Gettysburg, a book that limits itself strictly to the afternoon of July 3, 1863. More expansive is David Hackett Fischer’s Paul Revere’s Ride and Washington’s Crossing, works that thoroughly set the political, cultural and military stage before describing the signal events in their titles. This second type is what Steven Gillon promises us in his introduction: a study of how FDR handled the crisis of December 7, 1941. In very large part, he delivers on that promise.

His basic premise is something I can agree with wholeheartedly: recent fashions in historiography have devalued the acts of great actors and focused on the “impersonal forces of history”. A Marxist hangover, this notion dehumanizes our bygone ancestors just as efficiently as Marxism has disposed of its living enemies. Gillon starts on the right track.

I admit to being new to World War II historiography, so can’t say whether the insights and opinions Gillon offers are standard issue or genuinely original. Beyond knowing that the Pacific was seen as “our war” while Europe was considered “Britain’s war”—a perspective passed on to me by parents who lived through it all—just about everything Gillon offers up is a revelation to me. These range from local weather conditions to the military realities and public illusions of the day. For example:

December 7th, 1941 was an unusually warm day across the nation so fewer people were by their radios.

Before Pearl Harbor, there was no such thing as a Press Pass to the White House.

Pearl itself was a well-fortified base that many Americans, FDR included, considered impregnable.

To attend the emergency cabinet meeting, the Vice President and two cabinet members took a commercial flight from New York to Washington.

FDR had recently moved the Pacific Fleet from the West Coast to Pearl as a countermove to Japanese aggression.

Most satisfying of all, Gillon refuses to link that last detail to the worn-out “FDR-let-Pearl-Harbor-happen” conspiracy theory. Pretty extensive reading in other eras of history has shown me how rare real, bona fide conspiracies are in human affairs.

Gillon’s style is ideal for consumption through ear buds: not so sophisticated that it can’t be followed but not so plain as to be unlistenable. And, though a work of history, no maps are necessary. Initially John Pruden’s performance struck me as a little flat, but I got used to it and now think he was a perfect pick to deliver this book.

On the downside, Gillon revels in detail. There are mountains of it here, much of it unfocused into any thematic channels. I’m thinking especially of the chapter on White House security, or rather the lack of it and the fevered effort to beef it up quickly. We are told how many men were assigned to the South Lawn, how many weapons they carried and of what caliber, what the air raid bunker under the East Wing was constructed of, even the nature of the “facilities” (port-a-johns). But this is never set into a larger context of a nation stepping, albeit unconsciously, into the role of superpower.

Admittedly, I would never have bought this book if it hadn’t been a Daily Deal last December 7th. I avoid 20th Century history for the simple reason that partisan colors come out far too easily and, given the political allegiances of most of academia and publishing, that partisanship is predictably Liberal. We are told that FDR’s war message prompted Republican lawmakers to cheer him “for the first time in years”. Is this really that surprising? Isn’t the essence of a two-party system that there are two essentially different visions of how things should be? Reference is also made to Roosevelt’s recast Supreme Court, by 1941 purged of old “conservatives” and restocked with younger men who “shared FDR’s faith in activist government”. Living in the aftermath of more than 70 years of activism, it’s a faith I find it very hard to share. Perhaps the lowest point for me was when Gillon credited FDR with a level of deception and news-management that would be unthinkable today. It makes one wonder if he reads today's papers.

Also, the idea that the Second World War saved Roosevelt’s failed New Deal policies is credited to Adolf Hitler—a clear warning to anyone who has entertained that notion on their own. But then Gillon goes on to enumerate the number of unemployed (17%) in 1941, a clear indication that those policies had been less than wholly successful.

Again, this is why I usually avoid “modern” history. Beyond being something of an oxymoron, “modern” history reviews the arguments of 50, 60 and 70 years ago—arguments that are the prelude to the arguments of 2014. The epilogue contains perhaps the best example of this: rightly (and obviously) saying that World War II set up America on the road to Cold War confrontation, Gillon opines that the liberation of Europe and defeat of Japan didn’t prepare us for the “moral ambiguities” of fighting Communism in Third World countries. But didn’t we confront the Axis powers in North Africa? And what could be morally ambiguous about resisting dictatorships that existed longer and inflicted more human suffering than Hitler could dream of? And World War II was not free from moral ambiguity, either; my parents certainly felt that Dresden, Hiroshima and Nagasaki were necessary, but that’s debatable. But this is why I usually shun “modern” history.

On the other hand, you shouldn’t shun this book. Overall it is very informative and enjoyable, especially for someone like me who has only touched the tip of the historical iceberg called World War II.

What did you love best about Pearl Harbor?

Wide ranging coverage, beyond the formal accounts of bomb damage. Good background insights from variety of angles. My wife's Aunt was a Navy nurse at Pearl Harbor during the attack, stationed initially downtown, but ended up at Hospital for 10 days constant duty. She had been an Army nurse in 1918 in France, became a Navy nurse in 1923, and retired in 1944. Had seen enough after December 7th.

20 of 34 people found this review helpful

Roosevelt's leadership between Japan's attack on Pearl Harbor and the "infamy speech" is the focus of this book--a 24 hour period in US history. A short listen, it defines a transition from isolationist to world power. The book was also a short biography of FDR, including his career and personal life, with particular emphasis on his polio disability; how he managed the duties of the president. In the afterward, the author draws parallels with the present day. I enjoyed the book and would read/listen to more by this author.

Book is less than 7 hours. It was well narrated, well told events in history. I enjoyed listening to it.

Where does Pearl Harbor rank among all the audiobooks you’ve listened to so far?

Great perspective on a critical time in history!

General history is something less than cliff notes. This book takes this critical period of history and dives deeply into how Roosevelt reacted. I loved reading and learning of the detail and nuances of leadership.

Roosevelt's leadership between Japan's attack on Pearl Harbor and the "infamy speech" is the focus of this book--a 24 hour period in US history. A short listen, it defines a transition from isolationist to world power. The book was also a short biography of FDR, including his career and personal life, with particular emphasis on his polio disability; how he managed the duties of the president. In the afterward, the author draws parallels with the present day. I enjoyed the book and would read/listen to more by this author.

A dissection of the day that lives in infamy

Builds the history of the events leading up to the attack on Pearl Harbor and then focuses on FDR and his staff’s response to the events of that day. It gives interesting insight into men grappling with an insane event and how to respond appropriately. The book focuses on the time span from the attack until congress gives the vote to go to war.

Nothing New from the Past

Pearl Harbor: FDR Leads the Nation into War by Steven M. Gillon is just okay. There is nothing new that I haven't read about. I've listened to numerous of hours on this war and the 32nd President, that I have became a nerd on this subject. There are way better books out there.

If you are a total novice on the subject, or teaching history in high school and need reading material on Pearl Harbor and FDR, then this is a good start. But, if you are a history geek, I would simply pass on Gillon's writing on this one.

There is nothing new from the past that wants you to listen to more..