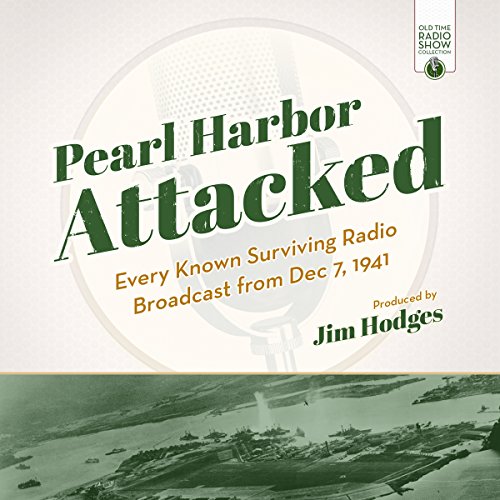 When the Japanese ambassador was visiting with our Secretary of State, he did not know what we already knew - that the Japanese attack on Pearl Harbor had begun. On a quiet Sunday morning in sunny Honolulu, Hawaii, Japanese planes were dropping bombs on our fleet at anchor, our planes on the ground, and the town itself. Our entry into World War II had begun.

Listen live as the first reports of the attack come in, interrupting a football game broadcast. The live reports from the scene, the speculation and shock - these broadcasts play in order as they were broadcast throughout the day.

I like having these recordings together in one collection

It is much more time consuming to download each separate recording presented here than to have someone else do it for you (thanks Jim!) Of course these are the same recordings which have been around for more than 30 years. So what?

Go to internet, hit down, sell on audible = PROFIT

The title says it all... this is nothing but going online, finding this broadcast which is available all over the place, recording an awful 5 second intro using what sounds like a webcam, and then you sell it and make a profit.

If the guy can show me he actually bought and licensed this content then I'll change my score - but I can find this same exactly broadcast everywhere online and they're old audio. There was literally nothing done here except to put some awful out of place into and outro music on it.