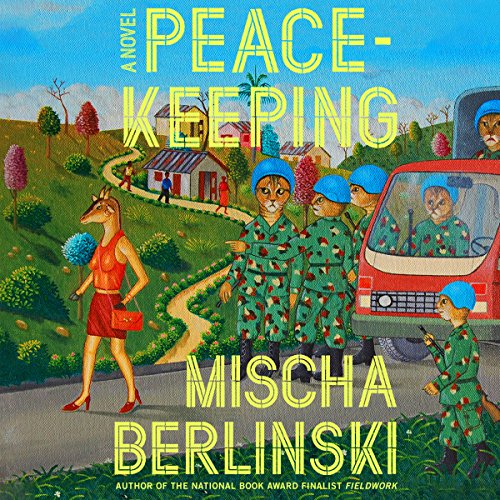 Mischa Berlinski's first novel, Fieldwork, was published in 2007 to rave reviews - Hilary Mantel called it "a quirky, often brilliant debut" and Stephen King said it was "a story that cooks like a mother" - and it was a finalist for the National Book Award. Now Berlinski returns with Peacekeeping, an equally enthralling story of love, politics, and death in the world's most intriguing country: Haiti.

When Terry White, a former deputy sheriff and a failed politician, goes broke in the 2007-2008 financial crisis, he takes a job working for the UN, helping to train the Haitian police. He's sent to the remote town of Jérémie, where there are more coffin makers than restaurants, more donkeys than cars, and the dirt roads all slope down sooner or later to the postcard sea. Terry is swept up in the town's complex politics when he befriends an earnest, reforming, American-educated judge. Soon he convinces the judge to oppose the corrupt but charismatic Sénateur Maxim Bayard in an upcoming election. But when Terry falls in love with the judge's wife, the electoral drama threatens to become a disaster.

Tense, atmospheric, tightly plotted, and surprisingly funny, Peacekeeping confirms Berlinski's gifts as a storyteller. Like Fieldwork, it explores a part of the world that is as fascinating as it is misunderstood - and takes us into the depths of the human soul, where the thirst for power and the need for love can overrun judgment and morality.

"Ben Williams's narration couldn't be more perfect for this tragicomic novel of Haiti. Williams perfectly inhabits the wry, observant, somewhat detached traveling spouse of an aid worker. Williams's talent is not just with the subtle inflections in English and Creole that give personality and heart to the colorful characters.... His conversational delivery also enhances the listener's understanding of Haiti's confounding mix of politics and superstition." ( AudioFile Magazine)

I lived for several years in Haiti and found the story to be very familiar feeling. What a crazy country it is. I dinged the reader one star for mispronouncing the names of some towns. Highly recommended