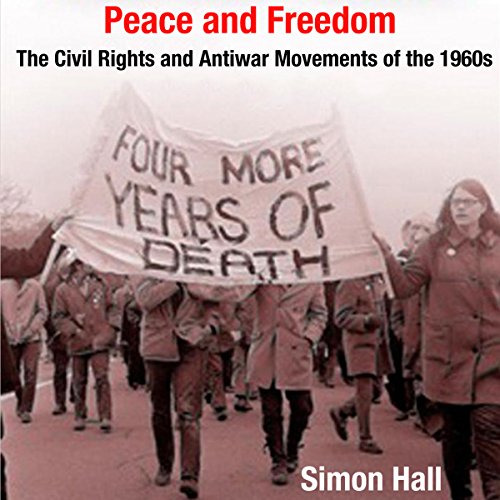 Peace and Freedom: The Civil Rights and Antiwar Movements in the 1960s (Politics and Culture in Modern America)

Peace and Freedom: The Civil Rights and Antiwar Movements in the 1960s (Politics and Culture in Modern America)

Two great social causes held center stage in American politics in the 1960s: the civil rights movement and the antiwar groundswell in the face of a deepening American military commitment in Vietnam. In Peace and Freedom, Simon Hall explores two linked themes: the civil rights movement's response to the war in Vietnam on the one hand and, on the other, the relationship between the black groups that opposed the war and the mainstream peace movement. Based on comprehensive archival research, the audiobook weaves together local and national stories to offer an illuminating and judicious chronicle of these movements, demonstrating how their increasingly radicalized components both found common cause and provoked mutual antipathies.

Peace and Freedom shows how and why the civil rights movement responded to the war in differing ways - explaining black militants' hostility toward the war while also providing a sympathetic treatment of those organizations and leaders reluctant to take a stand. And, while Black Power, counterculturalism, and left-wing factionalism all made interracial coalition-building more difficult, the audiobook argues that it was the peace movement's reluctance to link the struggle to end the war with the fight against racism at home that ultimately prevented the two movements from cooperating more fully. Considering the historical relationship between the civil rights movement and foreign policy, Hall also offers an in-depth look at the history of black America's links with the American left and with pacifism.

With its keen insights into one of the most controversial decades in American history, Peace and Freedom recaptures the immediacy and importance of the time.

The audiobook is published by University of Pennsylvania Press.

"An important monograph based on exhaustive archival research." ( American Historical Review)
"In Tocquevillian fashion, [Hall] offers his own 'outsider looking in' perspective. This is a work all serious students of the 1960s...should consult." ( Peace and Change)

The narrator paused frequently mid-phrase, which made the delivery stilted and awkward. The reading rate was uncomfortably slow, even at 3x.