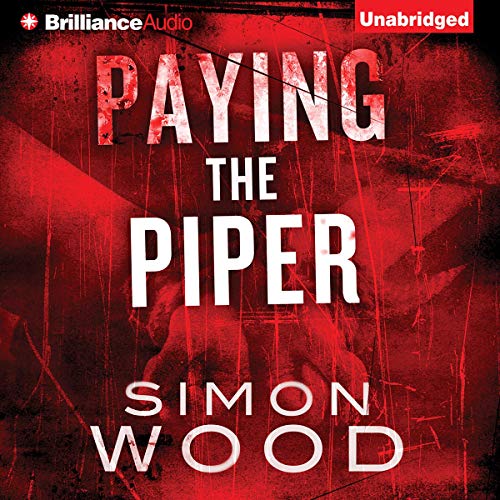 A serial kidnapper known as the Piper spent years snatching children from San Francisco’s wealthiest families. When crime reporter Scott Fleetwood got himself involved in one of the cases, the Piper went from kidnapper to murderer…and vanished.

Now, after Fleetwood has languished under crippling guilt and public scorn for eight years, the Piper emerges from hiding to kidnap Fleetwood’s son. He’s demanding $2 million, but it’s not really about the money: the Piper wants blood - and he’s going to use Fleetwood to get it.

In the pulse-pounding tradition of Harlan Coben and Gregg Hurwitz, Simon Wood hangs listeners on hooks of suspense and action, leaving them white-knuckled until the bloody, bitter end.

What listeners say about Paying the Piper

I listened to this book a few years ago and never left a review. It's one of those light and predictable books that just don't really make a whole lot of impact. Although not horrible it's not exactly memorable. I do think the characters have the potential to make a good series.
With that being said, while browsing mysteries coming out soon, I noticed a second book featuring Sheils and Fleetwood (the protagonists from this book). That book is Saving Grace and is going to be released on 1/9/18. After reading that book's description I would recommend reading this book first. If you are a kindle unlimited subscriber this audio is FREE!
If you found this review helpful please indicate so.
Thank You.

I'd say it was near perfect except that the narrator used the same voice technique on a couple of different characters and I would get confused about who was talking.
Loved the story line!

Would you consider the audio edition of Paying the Piper to be better than the print version?

What other book might you compare Paying the Piper to and why?

I've read a lot of very good books, but I don't believe I have read one that quite meets this standard. James Patterson, Michael Connolly and the like write with similar style.

Which character – as performed by Mel Foster – was your favorite?

I don't know that I have a favorite.

In "Paying the Piper" by Simon Wood, we have a serial kidnapper who becomes active again after a 9-year hiatus - or at least that's how it seems. In reality, nothing is like it seems. There are enough twists, enough heart-stopping moments, and enough intrigue to keep your heart pounding, your breathing labored, and your mind racing from start to finish. I could not put it down. Amazing tale from an amazing author!

Very well written book. Lots of expense.
Hope you all e not this book. I did

narrator leaves some to be desired

the narrator was bland. towards the middle of the book he started to differentiate between characters a little more. the plot is what keeps you going. the last quarter of the book you can't let go.

A page turner with a lot of turns,
but a little long. Give it a try.

Time to pay the piper

This book was so good. I had full intentions of giving it five stars up until the last two hours. Don't get me wrong, the author really knows how to put twists and turns in a story. It was a very clever story. But it seemed to take too long to execute each movement. It could've been shorter. All in all it was still worth reading/ listening to. I love this author's work. I plan on reading/ listening to all his books. Scott's wife was so annoying, and at times, so was Scott. I think this was mainly due to the narrator. He was pretty good with the story and most characters but a few of them sounded the same and the voice for the women sounded too whiny. I know that sounds too negative but there was so much more positive to the story that it is worth the read/listen.

the plot was believable, kept you wanting to read more and the twists and turns kept you guessing.

Well written. Plenty of action and tangled story. A few unbelievable lines but but the most part a very good story. Excellent narration.

Exciting and full of adventure

I like the character development and suspense. The author did a great job telling a story that kept me glued to the pages. Tension, suspension and excitement highlighted each chapter.

Had me shouting in my wellies!

I couldn't stop listening to this one and in the garden one day in my wellies and headphones in, I started shouting at the different characters. Had me gripped and I really enjoyed the story.

Disturbed me slightly that I found myself liking a certain character.

Story was a good listen. kept my interest but narration took some getting used to ... 3 characters suspicious, whining and sneaky 😏

Story was engaging but I really disliked the narration, intonation was like bad acting and voiced adopted for the characters was laughable.

I chose this on the off chance, after reading a couple reviews.
It's always a bit difficult judging from reviews as everyone likes different things.
I found this fast paced and absorbing. All the characters were good and strong. I even felt myself leaningg towards liking the baddies.
It's a gripping story that carries you along as it unfolds into an ending I for one, didn't see coming..
I really enjoyed it, I'd recommend to my friends who I know like the same type of books.

Gosh, I have no idea.

Would you ever listen to anything by Simon Wood again?

I'm not sure. It's possible that the narration killed it. It just became ridiculous, I think, and I had to stop listening. I struggled through until the second kidnap and then it got so annoying I just deleted it from my iPod.

Who might you have cast as narrator instead of Mel Foster?

Pretty much anybody, to be honest! If he was just reading the book without trying to do different voices it might have been better. Kevin Pierce, Scott Brick, Mikael Naramore and Adam Grupper are all excellent narrators.

I think the plot had some good ideas and it could have been very exciting.