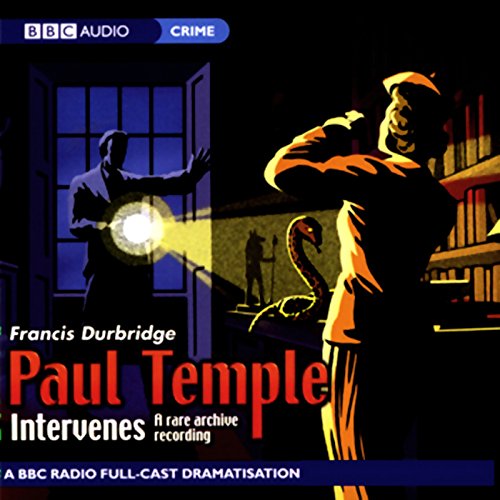 By: Francis Durbridge
Narrated by: full cast
Free with a 30-day trial

Radio's smoothest sleuth and his glamorous wife solve a case of international mystery.

From 1938 to 1969 crime novelist and detective Paul Temple and his Fleet Street journalist wife Steve solved case after case in one of BBC radio's most popular serials.

They inhabit a sophisticated, well-dressed world of chilled cocktails and fast cars, where the women are chic and the men still wear cravats. And where Sir Graham Forbes of Scotland Yard always needs Paul's help with a tricky case.

First broadcast on October 30th, 1942, this is the oldest full length drama to remain in the BBC archives. Starring Carl Bernard and Bernadette Hodgson as Paul Temple and his wife Steve, this detective duo help Scotland Yard to track down master criminal The Marquis, in eight thrilling episodes.

I'm a huge fan of the Paul Temple serials, and I was very interested to hear this one when I read that it's the oldest one in the BBC archives. I was a little disappointed for two reasons - I much prefer Peter Coke and Marjorie Westbury in the roles of Paul Temple and his wife, Steve, and the story is much too short!

That said, the actors who play Paul & Steve really aren't bad - they just aren't the voices I normally associate with the characters. Also, Charlie (their butler) does not appear in this one - the butler is a much older character.

The episodes in this serial are only about 15 minutes long, but they follow the same pattern used in the later serials: they start with a recap of the last minute or so of the previous episode and there is generally a major break at the mid-way point. That means much less action in each episode.

For fans of the series, don't miss this one - it's interesting to see how it evolved! For those who have never heard a Paul Temple serial before, start with one of the others and come back to this one only if you become a fan.

For serious Paul Temple fans only

Just read the previous review by Mary, and agree whole-heartedly: This isn't a bad dramatization, but Peter Coke and Marjorie Westbury are better, and this particular series isn't as good as the others.

One note: I found the sound quality on this one to be sub-standard (I think this is one of the ones that was rescued from a 'private collection', which I take to mean that someone somewhere taped it from the radio).

An original Paul Temple (and Steve) adventure from the early 1940's. This series is perfect for anyone who likes period detective radio programs. It is not noir but more in the gentleman, amateur detective vein. Steve is the plucky sidekick/wife and suffers from the limitations of female characters of the 1940's. However, the Temples relationship is a good one.

Good story, poor audio. Well worth listening to.
An old story. Similar to the newer ones. Audio quality is noisy sometimes.

When there are no Paul Temple's left.....

This is my least favourite of all the Paul & Steve audio's. But when there are no 'new' titles to download, beggars can't be choosers.
Very dramatic, really OLD fashioned radio. The Paul & Steve dynamic on this one is missing the more respectful, loving, camaraderie that is a evident on the others.

I really enjoy Paul Temple. Although the plots are silly and quite repetitive, there is a marvellous period atmosphere to the Peter Coke/Marjorie Westbury adventures. 'Intervenes' has different actors and is interesting as a curiosity, but the sound quality is a bit variable and the production values are generally a little crude. Do not start with it - choose the Geneva Mystery, the Spencer Affair or the Conrad Case. When you have exhausted the rest, this one will do.

Normally I'm a big fan of the Paul Temple dramatisations, both ancient and modern, but this one left me unnerved - and not for the right reasons! There's way too much loud music between scenes and every episode ends with "Who is..... The Marquis?" as if he's a vampire rather than a criminal. Carl Bernard as our hero has an extremely disconcerting, melodramatic laugh which, if I were Steve, would have me running sharply in the opposite direction. All in all, I guess it's an interesting historical listen to discover what wartime audiences were treated to, but I won't be listening to it again.

A bit hard to hear with all the crackling going on .as per usual good performance. And had me gripped to the end.

Scratchy but added to the authenticity of the time. Enough of a story but not as good a background as later ones. Nonetheless evocative and listenable

Love the Paul Temple stories.but due to the poor sound quality, either too loud or too quiet, meant I couldn't follow the plot.

This one is an earlier episode with a different actor playing Paul Temple.
Older style & not as comical as all the rest which I have in my collection.
This Paul is far too normal & serious. Glad they got rid of him & chose
Peter Coke who 'is' the real Paul Temple. This is still ok as a story to
while away in the back ground when you are doing else. I hope the BBC or some comes along with a decent actors & re record this.