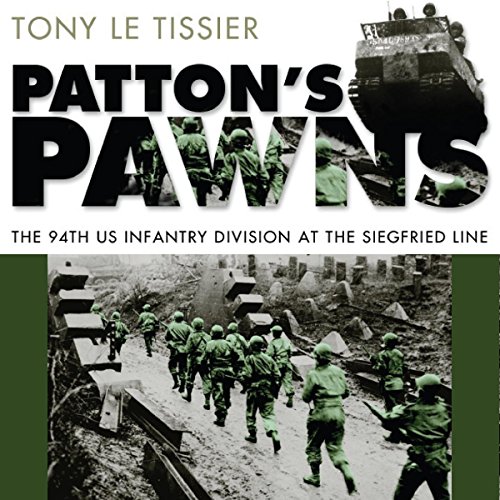 By: Tony Le Tissier
Narrated by: Richard Stageman
Try for $0.00

The 94th US Infantry Division was an organization formed late in the Second World War, made up largely of draft-deferred university students as enlisted men and an officer corps pulled together from various domestic postings with unfortunate consequences for mutual trust and respect.

Initially used as part of the force blockading the Brittany ports after D-Day, in December of 1944, the division was incorporated into General Patton's Third Army south of the Moselle-Saar Triangle, the base of which was a portion of the Siegfried Line known as the Orscholz Switch. Its first combat experience came in battalion-sized attacks during that terrible winter while the Battle of the Bulge raged to the north, and the Division suffered heavy casualties, many due to the ferocity of the winter weather. Patton, with characteristic zeal, excoriated the division's officers and senior NCOs for the rate of non-combat casualties. Thereafter, the division was ordered forward on an all-out assault to break through the Siegfried Line. After horrific fighting against entrenched defenders, with ice turning to mud as spring approached, on February 19, 1945, the 94th broke through to open the roads to Trier and the Rhine.

This audiobook is the most comprehensive study to date of the fierce fighting between the 94th U.S. Infantry Division and their German counterparts during that spring of 1945. It sheds new light on the achievements of the outnumbered division in penetrating Germany's Westwall. With characteristic verve and detail, Tony Le Tissier narrates the action and illuminates the tribulations and sacrifices of American soldiers who won their laurels at great cost.

"Le Tissier does a great job building an immediate bond between these hard-fighting soldiers of the 94th and the reader... Patton's Pawns is a worthy read of any military historian or for those interested in following one of the many infantry divisions fighting across Europe during World War II." ( On Point)
"This new and exceedingly detailed divisional history... is a well-written narrative." (Russel A. Hart, author of Clash of Arms: How the Allies Won in Normandy)
" Patton's Pawns draws some long-overdue attention to the considerable fighting prowess of the 94th... By and large, the Germans did not capitulate. They fought very hard, and Le Tissier illustrates this quite well." ( Journal of Military History)

What listeners say about Patton's Pawns