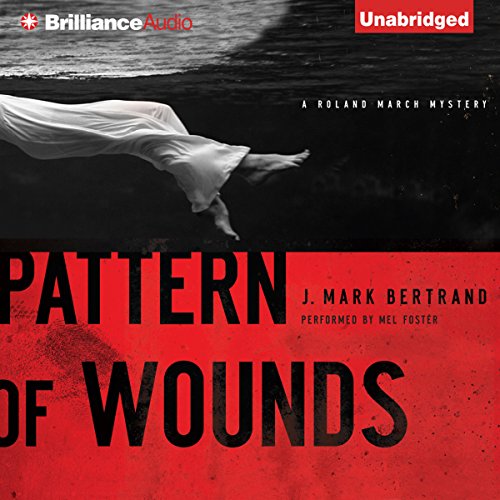 It’s Christmas in Houston, and homicide detective Roland March is on the hunt for a killer. A young woman’s brutal stabbing in an affluent neighborhood bears all the hallmarks of a serial murder. The only problem is that March sent the murderer to prison 10 years ago. Is it a copycat - or did March convict the wrong man?

Alienated from his colleagues, and with a growing rift in his marriage, March receives a series of taunting messages from the killer. The bodies pile up, the pressure builds, and the violence reaches too close to home. Up against an unfathomable evil, March struggles against the clock to understand the hidden message in the pattern of wounds.

“Bertrand’s got a pitch-perfect ear for dialogue. The cop-talk, for fans of the tough guy genre, hits the right note every time.” ( Comment)
“Bertrand’s well-plotted and tightly written novel offers glimmers of a world beyond the gritty Houston streets his cop must roam.” ( World)

What listeners say about Pattern of Wounds

This is my second Roland March murder mystery by J. Mark Bertrand. I thought that Mr. Bertrand's first book "Back on Murder" was excellent. I was equally pleased with "Pattern of Wounds." If you enjoy the mystery novels of James Lee Burke with his main detective, Dave Robicheau, I think you would enjoy these novels, too. The format for "Pattern of Wounds" was as an audio book. It was narrated by Mel Foster whom I thought did a very good job with the voices of the characters.

"Pattern of Wounds" refers to the pattern of knife wounds left by the killer on his victims. It, also, refers to the emotional and spiritual wounds of detective Roland March, his wife Charlotte, the young minister and his wife who rent an apartment from Roland and Charlotte, and many of the characters in the story. l have to say that I was captivated by the conversations Roland grudgingly engaged in with the young minister. They were intelligent, honest and compassionate.

Roland March is complicated. He is not the most well liked guy in the Houston Police Dept. But, neither is he corrupt, nor is he unaware of his shortcomings. In the investigation of the murders, he has to face some of his demons along the way, and the reader (or listener) is taken with him on a number of plot twists and surprises.

J. Mark Bertrand has created very real characters and situations. I am looking forward to his next Roland March mystery, "Nothing to Hide."

So Much Tension… Whew!

Bertrand is a powerfully strong writer. The characters are deeper than saucepan grease, and get heated sufficiently to sizzle the story into your appetite to keep on listening. Still, it's such a cliché to include the detective's bosses among a book's heavies. It'd be nice to read a procedural novel today where the team supported one another.

MAJOR ALERT… This is Part Two of an epic novel which Bertrand started in "Back In Murder" a book I enjoyed. But, this plot is so dependent upon the earlier novel that YOU MUST READ IT FIRST, and perhaps review it before starting "Pattern Of Wounds". I'm a busy guy and frankly the dependence of this book upon that one really reduced my enjoyment since, well, I didn't want to work so hard to review all of the characters and details to follow this one.

So, on balance, I may buy another Bertrand book. But if he waits too long to write the next Roland March novel, I'll probably pass… I know that I'll forget too much of the plot to make the next in this series accessible.

Mel Foster did an OK job, but once again, the list of characters is sufficiently large that Foster had difficulty keeping their voices sufficiently distinct.

Good Follow-Up in the Series

Some mystery series you can read in any order without a problem. This is not one of them. "Pattern of Wounds" is dependent on the first book, "Back to Murder", especially as it relates to Roland March's off-duty life. Since both books are enjoyable to listen, I urge you to take on this series.

As a Houston homicide detective, Roland March is one of the most relatable characters. Mr. Bertrand writes Roland with such warmth and humor. In addition, Roland has ups and downs like a normal person. He is not a super-human with a gun and sometimes gets it wrong. I am actually thinking about starting at the beginning and listening to the series again just for the pure enjoyment of the writing.

Not sure why the 3rd book in the series is not on Audible I will definitely continue Roland's story with the written version. The narrator gets some negative reviews. I am not so bothered by the narration and find that the voice and timing for Roland is enjoyable.

As a fan of mysteries, I like to be held in suspense from beginning to end, and I was not disappointed! in fact, even the final scene leaves the reader/listener eager to turn the first page on the next installment. so Audible? What are you waiting for?

Great story, Foster does well on the performance side. Betrand's stories are multi-layered and deeper than the typical crime flick.

Big Harry Bosch fan.. This was close, would listen to more if Roland continues his fight with crime.