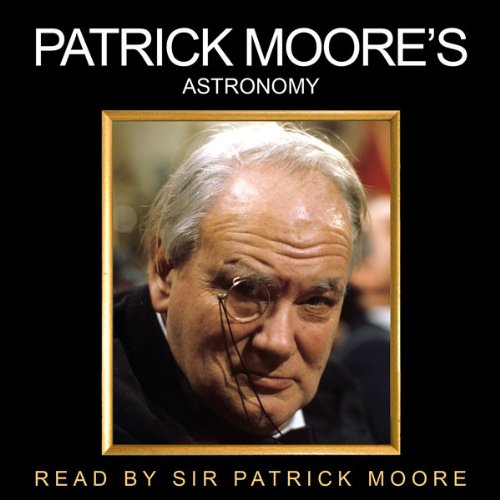 Why are we fascinated by the night sky? With this single question Patrick Moore sets out on a journey of exploration which takes the listener to the edge of the universe and back. Was ever a man more engaged and associated with his subject matter than Patrick Moore? He has become synonymous with astronomy, and we have grown up over the last 50 years with his name and voice becoming comfortingly familiar.

His TV programme The Sky at Night is the longest running TV show in the world. In 2007 it celebrated 50 years of broadcasting. He has had countless guests in that time, including recently, astronomy enthusiast Brian May the guitarist in Queen.

It is safe to say that he has become a much loved figure and a national icon. His appearance and his distinctive voice have become entwined in our national culture.

Appearances in such shows as Have I got News For You, Dr Who and the Morecambe and Wise Show have added to his appeal beyond fans of astronomy. And surely he is Britain’s best known xylophone player? This marvellous recording is no dry science lesson. His enthusiasm for his subject is positively infectious. Aimed principally at the newcomer to astronomy, he makes even the most extraordinary concepts comprehensible. This is a wonderful companion to the night sky. As is the man himself.

I really can't say. I am American, and Patrick Moore's accent was too difficult for me to understand. I am sure he is an excellent astronomer, and person. I tried listening, but was having to rewind too much to try and hear what he just said.

If you have difficulty understanding a thick British accent, this book in audible form probably isn't for you. Maybe try hard copy.

Hey, who would have thought Sir Patrick Moore could be so entertaining. This is an interesting book with many small and amusing stories of astronomer history and antics. I'm a mild enthusiast so I was pleased that the book was not to difficult to listen to in terms of content though the ear does need to tune to Sir Patricks voice and he does speak quite quickly...! Perfect for the amatur and only served to fuel my interest.

legend in his field

love it, could listen to him all day long. have listened to the book at least 6times