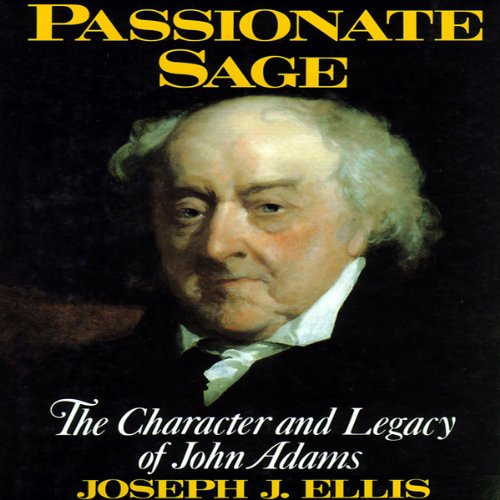 John Adams, one of the Founding Fathers of our nation and its second president, spent nearly the last third of his life in retirement, grappling with contradictory views of his place in history and fearing his reputation would not fare well in the generations after his death. And indeed, future generations did slight him, elevating Jefferson and Madison to lofty heights while Adams remained way back in the second tier. Now, in a witty, clear, and thoughtful narrative of Adams's later life at his home in Quincy, Joseph Ellis explores the mind and personality of the man, as well as the earlier events that shaped his thinking. Listeners will discover Adams to be both contentious and lovable, generous and petty, and perhaps the most intellectually profound of the revolutionary generation, whose perspective on America's prospects has relevance for us today.
©1993 Joseph J. Ellis (P)1995 Blackstone Audio, Inc.
Historical Politicians Presidents & Heads of State United States
Show more Show less

What listeners say about Passionate Sage

This book is more an analysis and description of the political mind of John Adams, as opposed to a personal biography of the man. This is a recommended read if what you seek is an understanding of how he thought and what his views on the issues were. Factual details are not the emphasis. Diary entries, private correspondence, essays and the voluminous notes he left in the margins of books he read form the basis of Ellis's perspective. The lengthy chapter describing Adams' letter exchange with Thomas Jefferson is riveting, but apart from that I found other chapters to be mostly too dry and academic for my purposes in buying this audiobook. Still, I plodded through it and am glad I did since Adams is among the most admirable of our founding fathers.

I feel every book I read about a founding father is the best book ever. even this guy. he had his faults but still turned out to be amazing. enjoyed learning more about him after his presidency.
Seriously underrated as a revolutionary hero, as a man, as president.
Way more forward thinking than maybe anyone else's in his time.
Needs lots more time and pages dedicated to him.

The Legacy of John Adams

An indelible portrait of this magnificent Patriot and Founding Father. More than a biography, Ellis gives us a glimpse of the man with all of his foibles and his greatness, of not just what he thought but the core beliefs behind what he thought and what shaped him. And Tom Parker's narration is perfect in every sense. Highly recommended.

It’s impossible to choose a favorite Founder. Much like the balanced government they established, each man seems to act as a check and corrective on the intellectual excesses and spiritual shortcomings of his fellows, making it hard to subscribe fully to any single Founder’s views. Still, if forced to choose, I’d select John Adams, and Joseph Ellis, with his typical penetrating insights and lucid style, presents a vivid exposition of the reasons why.

Focusing on the last quarter century of Adams’ long life, we see him wrestling with his bitterness at electoral defeat, defending his record in interminable newspaper articles, arguing with authors in the margins of their books, and mending fences with former friends and political opponents, Thomas Jefferson being only the most famous.

Reasons why I’d select the dumpy, grumpy sage of Quincy as Favorite Founder are most apparent in the marginalia and correspondence. On the French Revolution and it’s Jeffersonian enthusiasts:

“Amidst all the exultations, Americans and Frenchmen should remember that the perfectibility of man is only human and terrestrial perfectibility...disease and vice will continue to disorder, and death to terrify mankind.”

Or, on the true motivation behind our drive for wealth and power:

“In this, ‘who will love me then?’ there is a key to the human heart, to the history of human life and manners, and to the rise and fall of empires.”

Adams’ scattershot, somewhat volcanic literary style—the byproduct of his passionate yet less-than-systematic thinking—means that his ideas are sometimes better summarized by Ellis:

“As Adams saw it, political theory of the grandiose sort was invariable ‘ideology’, an organized collection of seductive hopes and wishes, a systematic way of going wrong with confidence…theoretical wisdom, and therefore a contradiction in terms.”

“Adams was the supreme political realist of the revolutionary generation. His lifelong habit of mistrusting himself effectively immunized him against illusory solutions to the problems of political power…”

So, turning a half-blind eye to his painfully hypersensitive nature, sometimes ungovernable temper, and strident anti-Catholic bigotry, I embrace his intellectual ebullience, his engrained skepticism of fashionable thinking, his courage to make the right decision regardless of the political price tag, and his faith that history—in other words, that you and I—would eventually recognize that he was right. And in so many cases, he is.

A measure of the book’s many excellences is the fact that, despite a rather timeworn (1995) recording, I listened without really noticing. The writing, the subject, the insights presented, and a superb performance by Tom Parker (aka Grover Gardener) overrode all mere technical issues.

Usually when you read a biography, the author LOVES the subject and you have to discount their claims and tone. Ellis does not like John Adams. It's a bit disconcerting but the overall content is stellar.

John Adams was a vain and difficult man, but no more so than any other world changer. His overall temperament was judicious. Ellis makes him seem like a maniac.

Ellis provides an insightful and charming analysis of Adam's psychology and political thought. Adams the national curmudgeonly grandpa is probably my favorite founding father. He wanted to be understood, respected, and loved for who he really was, warts and all. He seemed to extend the same understanding to others close to him, most of the time. That's pretty reassuring. I love that he encouraged his daughter-in-law Louisa's confidence. I wish I had a grandpa like that. If he had been listened to a bit more, would American exceptionalist arrogance have ever have caused so much trouble? Would we have so many problems with founders being worshiped as demigods? I'm inclined to think we would be a bit more careful, but only a bit.

Ellis' "American Sphinx" was an unsparing and intensely interesting look into the quixotic and generally duplicitous character of Thomas Jefferson. This earlier work on John Adams takes the same approach of looking at the man's character and how he thought moreso than his political accomplishments with a particular focus on Adams post presidential life.

Adams has always been one of the more interesting of the Founders because he was so very human. He wasn't the stoic marble man like Washington nor the wide eyed ideological dilettante like Jefferson. Adams was always... Adams. Cantankerous, punchy, vain, and simultaneously the Founder that was both the most and least self aware.

Ellis theorizes that Adams reveled in being contrarian to the point that his fierce intellectual independence often resulted in his isolation. Time and time again this proved true and while on one level Adams realized this, he never really changed. Naturally that damaged his early reputation within the pantheon of the Founders but it was the release of his papers on microfiche that enabled modern scholars to dive more deeply into his very impressive, and sometimes very entertaining, writing.

Ellis covers all this with a generally sympathetic approach because frankly, it's hard not to sympathize with Adams even at his most annoyingly argumentative.