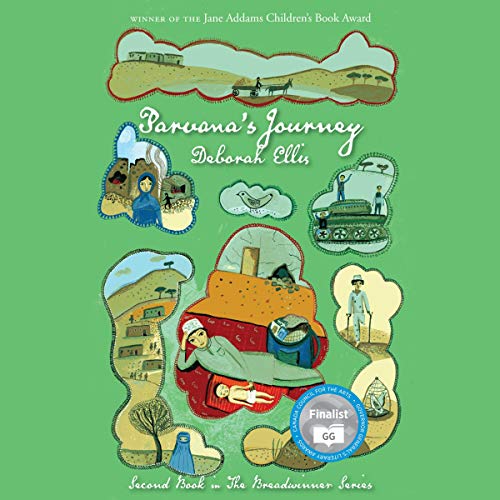 By: Deborah Ellis
Narrated by: Meera Simhan
Try for $0.00

The Taliban still control Afghanistan, but Kabul is in ruins. Parvana's father has just died, and her mother, sister, and brother could be anywhere in the country. Parvana knows she must find them. Despite her youth, Parvana sets out alone, masquerading as a boy. She soon meets other children who are victims of war - an infant boy in a bombed-out village, a nine-year-old girl who thinks she has magic powers over landmines, and a boy with one leg.

The children travel together, forging a kind of family out of sheer need. The strength of their bond makes it possible to survive the most desperate conditions.

Royalties from this book will go toward an education fund for Afghan girls in Pakistani refugee camps.

What listeners say about Parvana's Journey

If you could sum up Parvana's Journey in three words, what would they be?

Life experience of the unknown

What was one of the most memorable moments of Parvana's Journey?

Having nothing but still being able to continue on

Which character – as performed by Meera Simhan – was your favorite?

What made the experience of listening to Parvana's Journey the most enjoyable?

The continued story from The Breadwinner. It was heartfelt, plausible and very engaging. Myself and my 2 girls, aged 10 & 12, would definately recommend this listen.

Having listened to The Breadwinner first then Parvana's Journey, we were initially disappointed that the new narrator did not use the same pronunciations as in the first, however that distraction did not last long. She too spoke clearly and well paced and with clear and consistent characterizations.

The story was a beautiful representation of the state that Afghanistan is in. Although the book is very sad the end and make up for it.

A good story to portray the folly and tragedy of war. Good for young teens as well.

This is a amazing story with a amazing message. Also the narrator is really good!