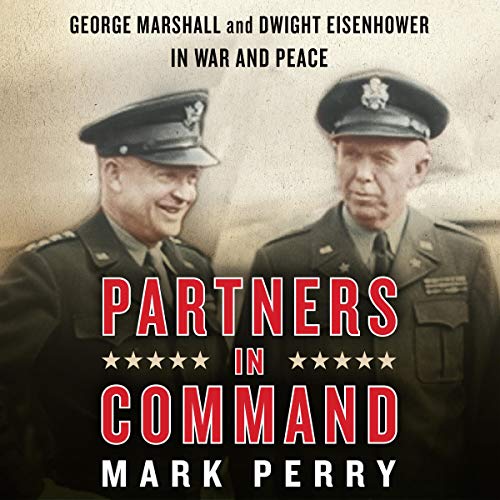 By: Mark Perry
Narrated by: James Anderson Foster
Try for $0.00

A unique look at the complex relationship between two of America's foremost World War II leaders.

The first book ever to explore the relationship between George Marshall and Dwight Eisenhower, Partners in Command eloquently tackles a subject that has eluded historians for years. As Mark Perry charts the crucial impact of this duo on victory in World War II and later as they lay the foundation for triumph in the Cold War, he shows us an unlikely, complex collaboration at the heart of decades of successful American foreign policy - and shatters many of the myths that have evolved about these two great men and the issues that tested their alliance.

As compelling as it is vitally informative, this work is a signal accomplishment.

What listeners say about Partners in Command

I have read many books about George Marshall and I enjoyed and found this book enlightening and a source of new information with a very interesting perspective from Mark Perry. It is well written and well worth your time!

I enjoyed seeing the action of WWII through the filter of Marshall and Ike relationship. gave me added perspective on the greatness of both men, especially George Marshall.

The book is well written and researched. The book begins when Eisenhower starts work for General Marshall in the beginning of 1941 and ends with Marshall as Secretary of Defense and Eisenhower as the first Commander of NATO. Mark Perry does spend sometime on Eisenhower’s role developing NATO.

Mark Perry writes primarily about military topics and has written books about General Douglas MacArthur and many books about the American Civil War including the book “Grant and Twain”.

The book is seventeen hours and fifty-three minutes. James Anderson Foster does an excellent job narrating the book. Foster is an Audie nominee and winner of multiple Earphone Awards. He also is one of Audible’ s top 20 highest rated narrators.

wonderfully written and great to read.

so many great details. so very interesting to the last word. Going to listen again soon.