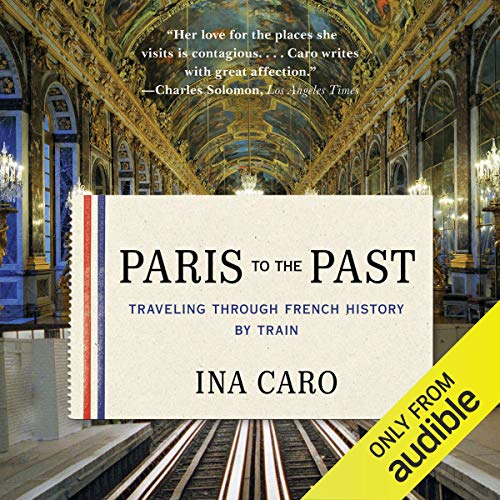 Paris to the Past

In one of the most inventive travel books in years, Ina Caro invites listeners on 25 one-day train trips that depart from Paris and transport us back through 700 years of French history. Whether taking us to Orléans to evoke the visions of Joan of Arc or to the Place de la Concorde to witness the beheading of Marie Antoinette, Caro animates history with her lush descriptions of architectural splendors and tales of court intrigue. “[An] enchanting travelogue” (Publishers Weekly), Paris to the Past has become one of the classic guidebooks of our time.

"I’d rather go to France with Ina Caro than with Henry Adams or Henry James." (Newsweek)

What listeners say about Paris to the Past

It’s a first hand account of the author’s travels through France, most sights and destinations are within a 90-minute radius from Paris, all accessible either by metro or train (regional train or fast train / TGV). The destinations are set up in chronological order in an attempt to educate the reader a bit about French History – it works! It’s a wonderful guidebook – although not the type you’d carry around with you.

Perhaps it’s because I am planning a trip to Paris for next spring and I am all ears when it comes to suggestions that I was so enamoured by this book, but I think anyone could benefit from the ideas presented.

You can be sure this book will be a resource for every trip to France I ever make! The entire thing was interesting, but I really perked up when it covered places I’d already visited (most of Paris, Versailles, Fontainebleau, Chartres and Rouen) or the parts that cover things I plan to see and do on my next trip (more of Paris, Tours and Lyon).

It was a great book, and excellent idea, and a lot of fun to read! Can’t wait to get over there and follow in her footsteps!

Yes, I thought this book was so well done. It's done in chronological order and follows the same families throughout history while you also get general history about the town and castles she is visiting.

All the fun facts about the royal families she talks about.

It made me laugh at times, but mostly it just made me happy. Every time I listened to it, it was like I was traveling through time with the author and traveling to France.

Great read, I really enjoyed it!

This is the perfect book to have in your arsenal when planning a trip to Paris/France! Such great storytelling (and gossip) about the epic people,places, art, and food that one finds when travelling by way of French history. I can't wait to go to these places. Caro has truly whet my appetite and I am certain my travel experiences will be much richer because of each and every one of her lovely and thoroughly researched chapters.

Would you listen to Paris to the Past again? Why?

I liked it so much that I bought the book. I've been to France without understanding the history. Now I am going back and this book has given me a great deal of insight

I love the history but am really quite uninterested in where the picnics happened, or which restaurants were eaten in. In this respect, I found the juxtaposition of personal preference for one diner over another very distracting. However, I used the historical information to plan a number of day trips when I was staying in Paris. I feel there should be two editions and I would prefer the abridged one with the non historical detail taken out.

Would you be willing to try another book from Ina Caro? Why or why not?

What aspect of Christa Lewis’s performance would you have changed?

Some of her French pronunciation was difficult

Did Paris to the Past inspire you to do anything?

Visited a number of the places after listening - including Chartres and Vincennes, and are planning quite a number of others in our next trip

My husband and I are "fired up" for another trip to Paris, from our Audible readings of two books related to the history and historic locations of interesting sites to visit for interesting day trips on the high speed trains, out of various Paris stations.

Ina Carow and her husband now live in Paris, and she is a scholar of history, an organized and savvy traveler with a wealth of highly interesting and informative historic stories to share - from North, South, East and West of the city.

I have found so much relevant information from which to build a framework for our upcoming visit and selected travels - ("off- season", on purpose - that our schedule and itineraries can be focused toward our interests, well-informed, and manageable - including spots (restaurants) and "best-kept secrets" in each visit.

She writes well, and the narrator speaks French with a fluid and competent vocabulary and pronounciation.

A useful catalogue of historical sites in France

At bottom this is a useful catalogue of historical buildings in France with an outline of their history, relevance and, equally important, how to get there.

I liked that it gave me many additions to my list of places to visit, some of which I'd only been vaguely aware of, while others were entirely new to me.

My only reservation about this audiobook has to do with the amount of detail it includes about historical personalities which isn't really my thing.

One of the two best books on France I know

One of the two best books on France I know. The other is Ina Caros book the road through history the predecessor to this book. If you are traveling to France or enjoy France you will love this book.

I wanted to like this book, and at times did. I did find myself many times hoping for it to end.
Although the idea seems grand, and going through time from one century to the next would make things easier, that is not what really happens.
The bones of the book go in sequence. However, i found that each chapter or area visited become muddled with jumping back in forth in time in a way that the author claimed they wanted to avoid. I did learn of some great sites I want to see on my trip to France, but a lot of the history is a giant blob of dates, kings, and mistresses. If it were to be edited to just do things in sequence, I think I’d enjoy it more. They’ll me about the time period of the site you’re visiting don’t say you’re going to and then talk about 4 different centuries at a single site.
The narrator gave a decent performance, in English, the French however was a jumbled mess and I could never understand what was being said. I had to pause and try to google context clues or anecdotes to try to find the site and it’s actual name. The narration also made me not like the writer much. They seemed quite smug. If you are a tourist, I don’t think condescendingly looking down on tourists is a good look. Maybe the author didn’t intend this, but the performance certainly made the author unlikeable.

Overall, it was an okay read, but I would never attempt it again.

This book was well written, interesting, funny and was loaded with ideas. I love to be Paris, but it's fun to vary things by traveling outside Paris by train. We are planning to follow the book and go forward in time. She really made the history come alive. Can't wait to get started.

A really interesting perspective and I learned a lot. It was more focussed on buildings than stories which was different to what I expected

Innovative way of recounting French history - by using the train to visit significant places in the evolution of the French monarchy. The author clearly is in love with France and its history. She brings her enthusiasm through in her story telling. This book will add extra interest and enjoyment to a French holiday - even if you think you know a lot about France.

Napoleon - until he got pretensions to become Emperor.

Would you be willing to try another one of Christa Lewis’s performances?

No. I found her style really irritating. I decided it's because I'm not used to listening to one American voice for extended periods of time. She sounds like Kim Catrall (who isn't American) so I had to keep out of my mind visions of 'Sex in the City'! I think it is a positive indication of the book that I kept listening!

The Royal train through France

This is very much a history of kings and queens. There is very little insight into the lives of ordinary people so the French revolution comes as a bit of surprise - not that the author is uncritical of some of the excesses of the French monarchy.The one thing I didn't like about the book was the rather tedious detail about meals the author and her husband ate. There are also some irritating 'tourist guide tips for visiting Americans' which could have been put in an Annex and the listener could choose to skip over them (which is much easier when reading a book).I listened to this book while in the gym. I really looked forward to listening to the next installment - I don't usually look forward with enthusiasm to my visit to the gym! - and I didn't notice the hour passing.

Took me straight back to the city

Would you listen to Paris to the Past again? Why?

I have only visited Paris twice and listening to the narration enriches my fond memory of this amazing city.