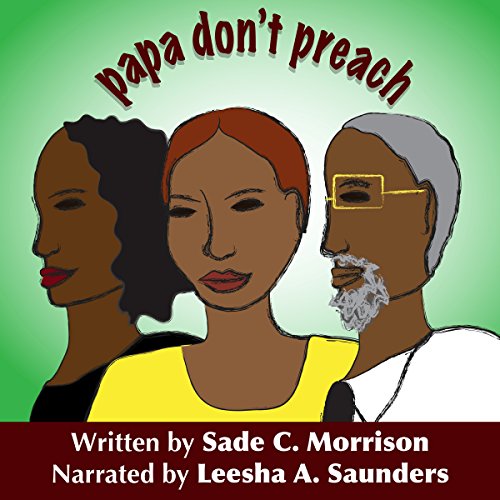 By: Sade C. Morrison
Narrated by: Leesha Saunders
Try for $0.00

Four years ago Jackie was laid off from her dream job as a photojournalist for Soul Beat magazine. She was forced to abandon her immaculate Manhattan condo and take a job at a small photography studio in Detroit. Although the Motor City is Jackie's hometown, she was not happy to return to a place full of shameful memories.

Despite the unexpected change in plans, she tried to make the most of her new start. Jackie reconnected with her best friend and moved into a great apartment downtown. She began a relationship with Patrick, a stylish attorney who shared her passion for jazz and ethnic cuisine.

The only complication in Jackie's happiness is her family. She avoids them even though they live 10 minutes away. It is too painful for her to be in their presence after a tragic event that no one dares to discuss. Jackie is convinced that her closest relatives are hypocrites.

This upsets her father, Reverend Abraham Foster, most of all. As the pastor of New Kingdom Baptist Church, "Honest Abe" (as he's affectionately known) is always counseling the members of his congregation, but none of them are aware that he can't keep his own house in order. His younger daughter, Rhonda, is struggling with a drug addiction. All of his prayers seem to go unanswered as she falls deeper into the darkness of temptation.

Jackie's world is upended when Rhonda reaches out to her. Things go from bad to worse when Patrick drops a bombshell of his own. The only bright spot in her world comes in the form of Harold, a handsome new coworker to whom she's instantly attracted. The only catch is that he's a devout Christian, and it's been decades since Jackie stepped foot in a house of worship.

Can Jackie open her heart to the Lord and true love? Will Rhonda find a way to overcome her addiction?

do not waste your credits

I could not get past the first chapter the narration was so bad. I will not get any more books narrated by Leesha

I thought I had figured the story out, much to my surprise I was wrong. The story kept you engaged and intrigued.