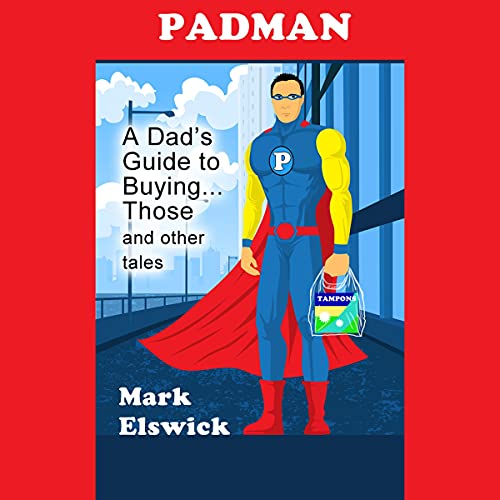 By: Mark Elswick
Narrated by: Brad Grochowski
Try for $0.00

In this collection of personal essays, Mark Elswick offers humorous episodes about being a man and father. Whether it’s his daughter sending him to the store to buy those...well, things that transforms him into "Padman"; his realization that at 42, he is slowly turning into an old man; or his reaction to his middle-school-aged daughter dating a "man" two years older than her, listeners - males and females alike - will find themselves cracking smiles when they aren’t busy laughing out loud.

Elswick also has a serious side to him. Interspersed with the comical tales are heartfelt looks into the lives of people who experience a traumatic brain incident (TBI) injury, including his own story of being in a life-threatening car accident that left doctors predicting he would be a vegetable for the rest of his life. With compassion and insight, while retaining his sense of humor, Elswick writes to raise awareness about TBI.

"I am officially announcing my own support for Mark Elswick, the writer who won his own battle with TBI and is now giving back of himself to those who are continuing or just beginning theirs. Padman offers an ‘edutaining’ read on a subject that is anything but humorous. And it underscores the importance of embracing now the devastation of TBI among the general public as well as in the face of our affected troops returning home." (Joseph Yurt, Reader Views)

"Mark Elswick’s style of humor will be appreciated by any male reader as he pokes fun at himself and the feminine world that he often perceives to be threatening his masculinity. Plus, what’s better than helping a good cause (traumatic brain injury research) while getting some laughs!" (Tyler R. Tichelaar, PhD, author)

What listeners say about Padman

An intriguing look at father hood and TBI

I feel that the message of this book
And it’s cause TBI awareness is wonderful. At the same Time I feel The author does himself and the book a bit of a disservice by not making this essentially two separate books. The book is starkly divided in its two goals. One to deliver some hilarious anecdotes about fatherhood and how folks with TBI cope and get by. The other half takes a serious and hard look at how people with TBI are treated, what they need and how people can help those with TBI. The constant switch bettered the two styles and types of tales leaves the reader a bit mixed up. Both styles and stories do what they are supposed to do. I laughed when I was supposed to and I gave serious thoughts and considerations and lamented the situations when I was supposed to. The constant switch just left me feeling off in general by the end of it all. I was voluntarily provided this free review copy audiobook by the author, narrator or publisher