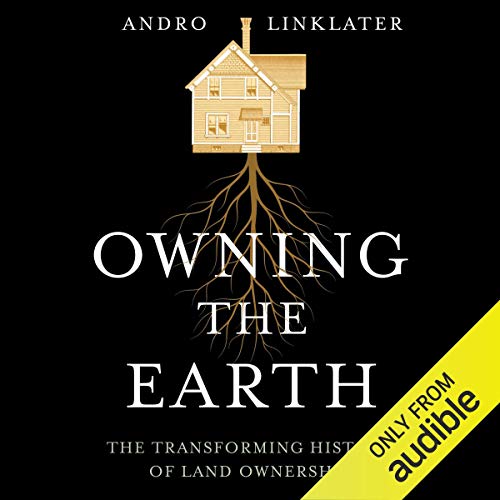 By: Andro Linklater
Narrated by: J. Paul Guimont
Try for $0.00

From the author of the acclaimed Measuring America, a dazzling chronicle, through history and across cultures, about how the ability to own the land we inhabit has shaped modern society. Barely two centuries ago, most of the world's productive land still belonged either communally to traditional societies or to the higher powers of monarch or church. But that pattern, and the ways of life that went with it, were consigned to history by, Andro Linklater persuasively argues, the most creative and at the same time destructive cultural force in the modern era - the idea of individual, exclusive ownership of land.

Spreading from both shores of the north Atlantic, it laid waste to traditional communal civilizations, displacing entire peoples from their homelands, but at the same time brought into being a unique concept of individual freedom and a distinct form of representative government and democratic institutions. By contrast, as Linklater demonstrates, other great civilizations, in Russia, China, and the Islamic world, evolved very different structures of land ownership and thus very different forms of government and social responsibility.

The history and evolution of land ownership is a fascinating chronicle in the history of civilization, offering unexpected insights about how various forms of democracy and capitalism developed, as well as a revealing analysis of a future where the Earth must sustain nine billion lives. Seen through the eyes of remarkable individuals - Chinese emperors; German peasants; the 17th century English surveyor William Petty, who first saw the connection between private property and free-market capitalism; the American radical Wolf Ladejinsky, whose land redistribution in Japan, Taiwan, and South Korea after WWII made possible the emergence of Asian tiger economies - Owning the Earth presents a radically new view of mankind's place on the planet.

What listeners say about Owning the Earth

What did you love best about Owning the Earth?

I love books that make you look at the world from a different angle. This book showed the powerful impact of property ownership through cultures, countries and time and weaved together the driving force of ownership impact on governments (or changes in government) and history.

What was one of the most memorable moments of Owning the Earth?

I actually enjoyed the conclusion that brought the ideas of the book together. It changed the way I look at the world, by breaking out these ideas that are so fixed in my mind to show the progress and change in them over time.

The book is well written and easy to follow and as you jump through countries and time to bring forward a comprehensive understanding of property ownership. That sounds a little boring but I never found it boring, the analysis and story were so well done that it kept me intellectually curious to the end. I as I said before it really helped me to see and understand the world a little different.

I stumbled upon this book while in the library and the title caught my eye, especially as a local real estate agent. I renewed it several times because the book is THICK. Presently, my schedule would not allow me the time to visually read so I found it on Audible. I AM SO GLAD I DID. Hearing the book made it much more enjoyable and retentive. The comprehensive world history provided in this book is absolutely amazing. This book will remain in my library and will be read over and over again. It is an excellent resource and its fluidity is brilliant. The 17 hrs and 9 mins were worth it and I have already recommended it to a few people who I know will appreciate it as I have. Wow...just wow!

Should Be a History Course

There is a lot of general history here, which just happens to be about owning land, and which itself just happened to have been at the center of history. You see humanity maturing here.

I want to read the book but the narrator's voice is awful, sounds computer generated by a very cheap program.

If books could take the breath away (which they can't) this would be a breathtaker. You'll need an academic-ish mind to fully appreciate its glories, as it's rich/heavy in scholarly references. But in terms of its scope and ambition, it really is something quite special with a balanced but nevertheless visionary argument threaded through. All in all, a wonderful parting gift from Andro Linklater, my new intellectual hero.