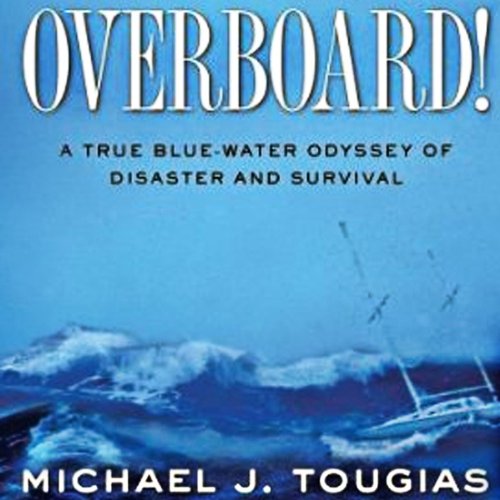 By: Michael J. Tougias
Narrated by: Malcolm Hillgartner
Try for $0.00

In early May of 2005, Captain Tom Tighe and first mate, Loch Reidy, of the sailboat Almeisan welcomed three new crew members, two men and a woman, for a five-day voyage from Connecticut to Bermuda. While Tighe and Reidy had made the journey countless times, the rest of the crew were paying passengers learning about offshore sailing—and looking for adventure. Four days into their voyage, they got adventure but nothing that they had expected or had any training to handle.

A massive storm struck, sweeping Tighe and Reidy from the boat. The remaining crew members somehow managed to stay aboard the vessel as it was torn apart by wind and water. Overboard! follows the simultaneous desperate struggles of boat passengers and the captain and first mate fighting for their lives in the sea.

“I was frightened or astonished by every page of this beautifully told story of raging elements and human survival. And then the tale is ultimately and heartrendingly inspirational. You will not be able to put this book down.” (Dodge Moran, first American to sail solo, nonstop, around the globe)

What listeners say about Overboard!

THANK GOD! Remember the anticipation, the dread of "Jaws"? Well, to me, this was even more intense, AND non-stop!

I found myself pacing when I was in my office, and when I tried listening in bed, I couldn't relax enough to sleep (don't try it).

Suspenseful? Oh...I'd say so. It felt like a 6-hour roller coaster ride!

What a harrowing experience at sea!

I really enjoyed all of the descriptions of what happened at sea and the suspense about who would survive the sailing trip. I was also impressed by the Coast Guard rescue teams.

The narrator, Malcolm Hillgartner, did a great job.

The story is quite an adventure. You will not be sorry you listened to it.

Succinctly stated "This novel had it all." Character development, pacing, amount of detail needed to visualize what was going on, the storyline. From beginning, middle, to an ending that brought tears to my eyes and was the epitome of uplifting, I thoroughly enjoyed this masterful work of nonfiction.

This book has all the suspense of a Hollywood blockbuster. I would recommend this incredible tale to all who love suspense, danger and the high seas.

What other book might you compare Overboard! to and why?

I can't think of a similar book. This is really different.

My favorite scene had to be the one where Loch Reidy is fighting to stay alive , floating on 30 foot waves while circling the rescue ship, who doesn't see him.

It did neither. However, I felt a heart pounding excitement while listening and did not want to stop.

Exceptional book! It started out like "any other disaster at sea" book where a small craft is endangered by a huge storm. Where it goes from there you will not believe!

The author taught me about sailing and drew me into the action. The narration was good, too. I never got bored, and I never regretted the purchase. That's good enough for me. Worth the time & money.

Sidenote: as others have said, you should also check out The Perfect Storm. It's got more information about storms, and boats, and the lives of sailors, as well as the personal connection to the characters. (TPS is a better book, without question.)

This story was amazing, thrilling and emotional, at times! Several times I felt like crying. The will to live is so amazing! It makes you realize what a precious gift life is, for certain! This story is a keeper.

This is the story of amazing suspense, courage, skill, hope, endurance, persistence, and, finally, love. My only disappointment was the spelling out of important acronyms rather than pronouncing them in the way that sailors (at least those that I know)
pronounce them. The one that was most striking to me was the EPIRB device. My daughter, a professional Master 100 ton (currently a yacht captain) has always pronounced this "ee perb" Despite this minor issue, it was an excellent performance. The performance, coupled with the highly detailed story, made for excellent listening. The cadence and tone of the presenter always seemed to hit the right note. The tale was not sensationalized--the performer let the suspense of the story reveal itself. It's easy to care for every person involved in the voyage and the rescue. Well done, everyone! Peace and fair winds to you all!

I feel worn out & drained! Good job! I feel I've been through the torrential wash with them non stop!

narrator was very good. this book was one of the best I have listened to. Alone together by Christian Williams is another great book that is as good as this one if you like great sailing books

Would you consider the audio edition of Overboard! to be better than the print version?

The story was well told, the writer kept it interesting throughout the telling and didn't over-dramatize the events covered.

Which character – as performed by Malcolm Hillgartner – was your favorite?

The captain and the first mate were the most interesting because their experiences were so much more extreme than the experience of the other people involved.

The time before the first mate was rescued was pretty amazing.

This was good story of adventure and survival, if you're in to this genre, you should enjoy it.