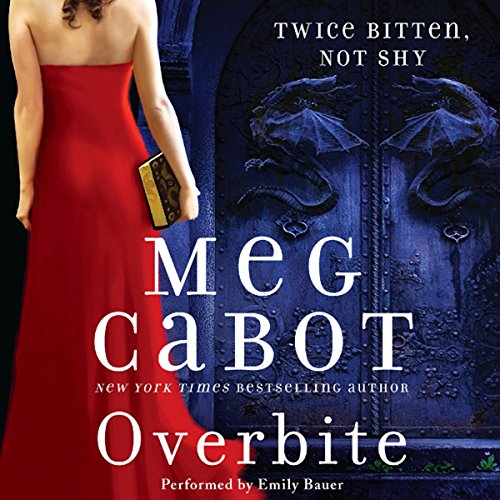 Meena Harper has a special gift, but it’s only now that anyone’s ever appreciated it. The Palatine Guard—a powerful secret demon-hunting unit of the Vatican—has hired her to work at their new branch in Lower Manhattan. With Meena’s ability to predict how everyone she meets will die, the Palatine finally has a chance against the undead.

Sure, her ex-boyfriend was Lucien Anton­escu, son of Dracula, the prince of darkness. But that was before he (and their relationship) went up in flames. Now Meena’s sworn off vampires for good... at least until she can prove her theory that just because they’ve lost their souls doesn’t mean demons have lost the ability to love.

Meena knows convincing her co-workers—including her partner, Über-demon-hunter Alaric Wulf—that vampires can be redeemed won’t be easy.... especially when a deadly new threat seems to be endangering not just lives of the Palatine, but Meena’s friends and family as well.< /p>

But Meena isn’t the Palatine’s only hope. Father Henrique—aka Padre Caliente—New York City’s youngest, most charming priest, has also been assigned to the case. So why doesn’t Meena—or Alaric—trust him?

As she begins unraveling the truth, Meena finds her loyalties tested, her true feelings laid bare - and temptations she never even imagined existed impossible to resist. This time, Meena may finally have bitten off more than she can chew.

What listeners say about Overbite

I am a Meg Cabot lover and proudly call her my favourite author, but this book leaves a lot to be desired. Usually I devour her books in a day or two, but this one took me two weeks!
I didn't sense the author's usual passion for her characters and the reader seemed like they were trying to push themselves too hard into doing accents they couldn't do.
I'd say listen if, like me, you're a Meg Cabot complete-ist, but otherwise skip it.
And if it's your first time to the author, definitely start with a different series! Perhaps the Airhead novels or The Mediator series. Or if you want a vampire connection and something more adult go with Queen of Babble read by Ilyana Kadushin (whose voice you'll recognize from Twilight).

Not Meg’s best work, to be honest. Did I persevere after the first book? Of course, I did. I had to see how it ended. Unfortunately, the main character is probably the least likable of all of the characters, and the book's reading was at times painful to listen to. The narrator was probably doing the best she could with what she had. However, her accents were trash and annoying. Would I have purchased this book again? Probably not. There are so many other series by Cabot that are far more entertaining.

This book was terrible

This was such a waste of money and I can’t believe I sat through the whole thing. I’m almost mad at the way this ended. Smh... save yourself some time and go listen to something better. Like cirque fu freak or even twilight. Meg Cabot is usually an excellent writer but this .. idk this was just a mess

I was so excited for this book after reading the first two. I decided to get it on Audible because I was taking a long road trip. However I was in for major disappointment, The narrator turned the strong characters into whiny sissys which just made it hard to listen to.

I really enjoyed Insatiable, but all the great things that made Insatiable hard to put down, were noticably absent in Overbite. Neither Lucien nor Alric was as alluring as the first. Meena was not as funny. I was really disappointed in this sequel, which rarely happens with a Meg Cabot book.

The sequel is good

This not a read/listen overnight book. But it has a certain appeal. I purchased this because I want to find out what happend to the characters in Insatiable.
Meg Cabo'st twist on a modern day Dracula is interesting and that is why I enjoyed the series. I would recommend this for an older teen or someone who is not hard core vamp.

Wonder if Meg Cabot got Bored

I LOVED the first book of the series and was so intrigued with Meg Cabot's take on vampires. This book while much shorter, was slow, unclear and suddenly ended.

Emily is a great narrator and really delivered in this book - it wasn't her fault the story did have much subtext.

It starts out really exciting and action packed but about a 1/3 of the way through, one starts to lose interest. I was anticipating a deeper plot line when they mentioned the Jersey devil - but it really didn't take that fun turn into story land.

I did enjoy how we got to know Alex more, somehow he turns out alright. But if there's another one of these stories coming out, it needs to be more like the first.

If you could sum up Overbite in three words, what would they be?

I love all of Meg Cabots books. This series was much different than the rest of her series which made it so much more interesting. Even though I read the book right after it came out hearing it makes it come to life.

Voices felt inconsistent with the last audiobook and the story didn’t have as strong a narrative this time. It was ok but I wouldn’t give it a second listen.