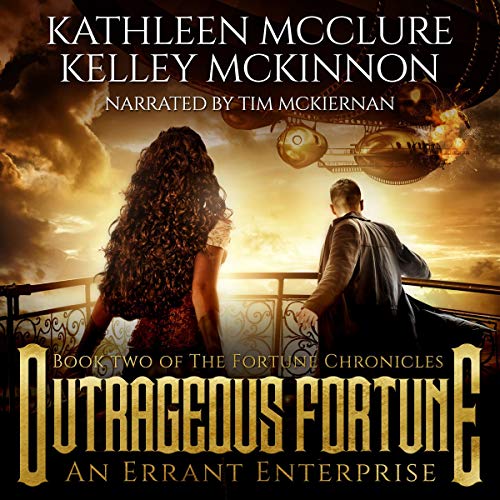 By: Kathleen McClure,Kelley McKinnon
Narrated by: Tim McKiernan
Try for $0.00

On the planet Fortune, tech is low, tensions high, and the price of doing business dangerously steep.

So when a mysterious woman offers the crew salvation (or, at least, a paying job), John signs on, only to discover that neither the job, nor the woman, are what they appear.

Now John and his crew are on the run and embroiled in hive of deception, while everything he hoped to save teeters on the brink of disaster.

Outrageous Fortune is the second stand-alone novel in the science-fantasy series, The Fortune Chronicles. If you enjoyed the characters, banter, and action of Firefly, you’ll love the crew of the Errant.

What listeners say about Outrageous Fortune: An Errant Enterprise

Story and Performance are great

The story and the performance are great. Unfortunately, there are some editing 'artifacts' where problems were not edited out. These editing problems have a minor effect on the immersion in the story. The performance is great and otherwise worth 5 stars.

The world-building is awesome in this series. The timeline of this story intertwines with the first book in the series enriching both stories and really fleshing out the world building. The flashbacks are handled well and are done in such a way that the mystery is preserved for as long as possible. Each character is distinct and unique (even the minor ones) with a backstory that is evocative and again enriches the world-building.

I highly recommend this anyone interested in far future, other world, alternative history, and steampunk.