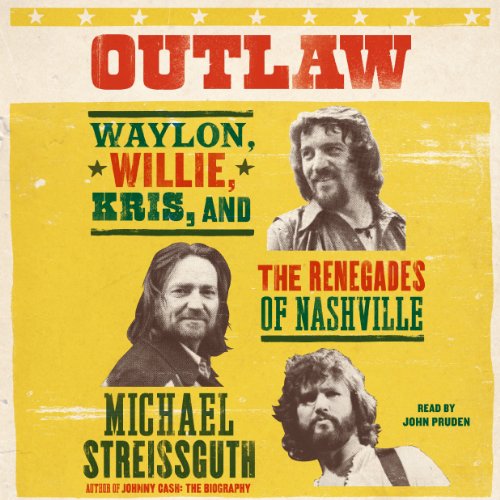 By: Michael Streissguth
Narrated by: John Pruden
Try for $0.00

By the late 1960s, Nashville, Tennessee, was firmly established as the center of the booming country music industry and home to what was known as the Nashville Sound, characterized by slick production and adherence to an increasingly overused formula. But the city was changing. Young people from all over the country were streaming into the bohemian West End and colliding with three trailblazing artists who would soon rock the foundations of Nashville's music business.

Surrounded by the street vibes of the West End's burgeoning underground scene and the outlaw protest tradition of Nashville's unlikely civil rights leaders and antiwar protestors, Waylon, Willie, and Kris began resisting the unspoken rules of Nashville's music-making machine and instead forged their own creative paths. Their music, personal and not easily categorized, was more in the vein of rock acts like the Allman Brothers and Bob Dylan, and it communicated a stark rawness and honesty that would influence artists of all genres for decades to come.

Studded with a diverse secondary cast including Johnny Cash, Rodney Crowell, Kinky Friedman, Billy Joe Shaver, and others, Streissguth's new book brings to life an incredible chapter in musical history and reveals for the first time a surprising outlaw zeitgeist in Nashville. Based on extensive research and probing interviews with key players, what emerges is a fascinating glimpse into three of the most legendary artists of our times and the definitive story of how they changed music in Nashville and everywhere.

What listeners say about Outlaw

Tried to like this book twice but find it just so weak.

Basic over view with zero insights for as much as I could stand it. Kinda cobbled together from anecdotal stories.

Needed a Sam Elliot or Waylon type narrator as well. Johns not bad but too straight sounding for an outlaw story

I am a huge Waylon fan, that is why I listened to this book. I sure did find what I was looking for. The detail and inside stories this author presents about Waylon and the Outlaws ring with truth, and shed a more original light on the Outlaw story instead of kust the generic version of the battle for artistic control and good times had by all.

Waylon's character is put under scrutiny here more than in his own biographical material, allowing me the opportunity to get to know the man better. Willy and Kris sure do get a large portion of the story, and theirs is as revealling and insightfull as any other artists biography out there.

This book skillfully tells the tale of multiple artists simultaneously, weaving in and out through their lives and around those people who supported them and witnessed the moments we all wish we could have seen. This book is a portal into the 70s and the nitty gritty details of what being a outlaw artist was like through the eyes of the most prominent 3; Waylon, Willy, and Kris.

Thanks to the author for telling this story!

This is a great listen, telling the stories and sharing the lives of the men that changed country music forever.

This book delights in the detail, and I think that it would be very heavy going if you do not already know who most of the writers and singers were. If you can 0lace most of them then you have a context which brings everything together.

My only reservation is that the outlaw genre was always very artificial so you are only seeing a very partial picture, but then again it was a genre so you really get inside the subject.

I would love to see how new country came about in a reaction against outlaw country.

I especially loved the stories about the crazies who operated at both the edge of outlaw country and indeed the edge of sanity!