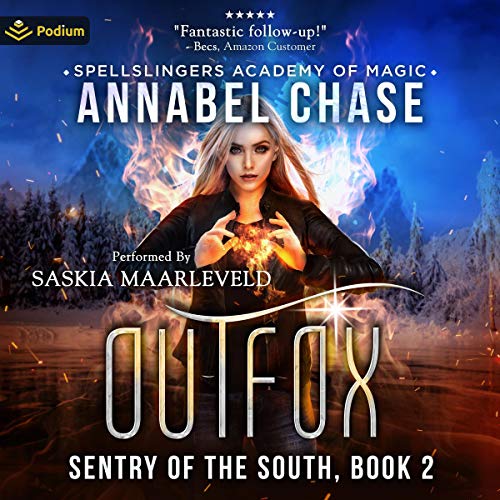 By: Annabel Chase
Narrated by: Saskia Maarleveld
Try for $0.00

For years, my family was in possession of the top half of an ancient sword. Now this dangerous artifact has been stolen, and it’s up to me to recover it. With the help of my friends, I must follow the trail of clues to find both halves of the sword before they can be reforged. When my investigation leads me to an Elvis-impersonating vampire, a magic carpet lizard, and a homicidal banshee with no regard for the Fountains of Bellagio, I know I’m in for a rough ride.

My magic is the only thing that stands between absolute power and preservation. Can I prevent history from recurring or are we doomed to repeat it?

Outfox is an urban fantasy mystery with humor, action and adventure, a powerful heroine, and a charming yet unlikely hero.

What listeners say about Outfox

In real life she'd be thrown out of college on her ear .She is an advanced student who is constantly harassing and interfering with the professors,who are trying to teach the students,who actually want to learn.If they try to teach something that isn't in her very narrow field of interest she makes loud comments,and does everything that she can to interfere with the class.If she gets even the mildest criticism for her behavior she says that it's because all of her professors want her to fail.In real life people like her end up unemployed and living in their parents basement,which is of course non their fault ,because all of their employers have been out to get them too.
.

I hate to leave negative reviews, but, while the story and narrator weren't bad, per se, the product as a whole, was lacking.

I didn't like the narrator. She seemed to have three kinds of tone and cadence...and, she used them for all the characters. Brynn and Peter are now intertwined in my mind. I couldn't tell if the narrator was trying to hint that Brynn maybe was more of a tomboy, and, liked women, or, if this was just an impression I got from her simply sounding like Peter.

The story was okay. I did finish this book, and the first one. There were a few moments where I "couldn't wait" to hear or learn a specific thing, but, they were few and far between.

The heroine is static, and... young. She's stubborn to a fault, and, not someone I'd personally choose to associate too much with, if I were in this reality. Yes, she's smart, she's an overachiever, and has great lineage, but, where's the growth, the reality, and the humbleness? There are constant reminders that she is Danielle Montrose Degraffe, and that she is not her grandmother, but, what does this really tell us? We never learn what it looks like for the "addict" grandmother, and how Dani compares. Yes, we know they're both very powerful, and they look alike, but, what does it really mean, to be addicted to magic? Does that mean you always use it, even when you don't have to? Is it the tingling or buzzing Dani is experiencing, where she has to stop herself from using magic? If so, at what point does she realize she ALREADY is addicted to magic, and, rectify the situation? I would've liked to see more character growth in the first two books, to continue on with the series.

Also, I think it's utterly ridiculous that she should be doing these missions...there's a whole organization out there, that's supposed to take care of these things, and yet they're letting a second year student run the op? Just how old is a second year? Are we talking, college, or high school? Either way, what's the AMF doing, that they're not getting involved in the overthrow of a troll, and, reforging of a super-powered sword?

Furthermore, poor Peter. Dani treats him pretty poorly, and, I found myself constantly wishing she would "wise up." Poor, poor Peter.

I did enjoy the story, however the author WAY over uses the word “said” and it’s a huge turn off. I almost stopped listening and am not sure I want to listen to the final book in the series. Also, it’s one thing to be confident, it’s another to be unbearably full of yourself. It’d be nice to see “princess” knocked down a peg or 2.

The story is awesome, but sometimes the narrative is a bit confusing. considering the narrator uses the same voice with the main character, and others at the same time. it would be better if she would actually separate all the characters, but I guess you get what you pay for

I read this series in the wrong order but it was still interesting. IMO I prefered "Sentry of the South" series more than "Spellslingers Academy of Magic" but it's just my preference. They are both fantastically written and full of action, murder and paranormal mystery. The one thing that really gets under my skin is - none of the books provide a Heroines name in their description so it's hard to remember who you're writing about. In this series the heroines' name is Dani -

Dani is living in her beloved grandmothers shadow at Spellslingers Academy of Magic and working extremely hard to not only become the Sentry of the South but create a new legacy for her and her family. Her much loved grandmother's addiction to magic tarnished the family name. (While I understand the thought behind this, I struggle with the depravity written into the story her grandmother did. IMO her parents were far worse people)

Dani's aunt was in possession of the top half of an ancient sword. Her Aunt has asked Dani to find it and return it - No one knew a lot about this artifact and now that it's been stolen. They soon learn - it appears to be a dangerous item with deadly consequences. They need to travelling the globe finding clues to find both halves of the sword before they can be reforged .

MC is unwilling to see any short comings in her or her grandmother's past and takes every moment to cry about. adapt over and be better is not being taught to this young lady, but whines and pouts and through tantrums when confronted. Mostly a good listen but as a parent listening to this is frustrating.

Outfox is an enjoyable story.

The story is enjoyable. However, I feel it was written for a teenager audience. Additionally, the "I said, she said, he said" is very irritating when listening to the narration being read.

To many I said she said he said