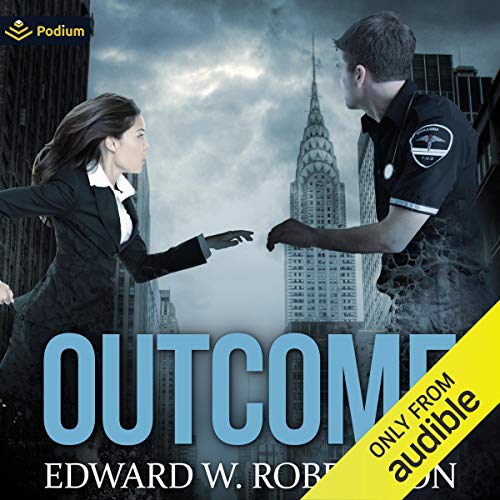 By: Edward W. Robertson
Narrated by: Ray Chase
Try for $0.00

As an agent of the Department of Advance Analysis, she's one of a handful of people who knows about the spread of a new virus - one she believes will wipe out mankind. With her bosses in denial, she flies to New York to get her ex-fiancé, Chip, to safety. But he's already been scooped up and quarantined - and so has his adopted daughter. Pursued by her own agency, Ellie will stop at nothing to break Chip out before the virus claims them all.

What listeners say about Outcome

Sets up the stories nicely

A good short story that sets the scene nicely for breakers (although through half of breakers they don’t make an appearance so I hope we hear what happens to the characters at some point). It is a short story so you don’t get the full picture, but if you liked Stephen King’s “The Stand” I would suggest you pick this up as well.

Mr. Chase does a great job with the narration.

Very good start of a series. The characters are kept simple, the plot simple, but the telling of the story is where this stories shines.

The End does not justify the Means

Lady Agent feels justify in murdering fellow agent. Wrong. #1 do not become an agent because you have to lie. #2 Murder wrong.

The premise that any conduct acceptable to survive is wrong.

Couple bickering while the world ends

Just couldn’t finish it. Suspension of disbelief never even established. The whole lone wolf vs the establishment over a flimsy premise just doesn’t fly. If you like watching a dysfunctional couple argue despite the world ending…. Knock yourself out.
Narrator was decent, but couldn’t carry this by himself.

I have the entire series and was happy to listen to the prequel from audible plus
Really liked the story- the narrator was not a good fit - that is being kind!

I didn’t quite make it through chapter 1. The narration was ridiculous. The story was getting an interesting start, and I would have like to continue, but I could stand the thought of listening to Ray Chase for another minute. He was overly dramatic and made the story and character sound stupid. Thank goodness the first book was free.

Very boring, but it was free so what can ya say. An alien plague takes out the world, not for me

How it all began

Would you consider the audio edition of Outcome to be better than the print version?

Probably since I don't like to physically read. I am a good listener though.

It introduces the series since this is book 0.5. I read all but book 5 before listening to this book. (Book 4 has ties to this book.)

Ray Chase is great. I need to check on other books he has narrated.

Enjoy life while you can. Without electricity, quality of life will degrade quickly.

I love the series. I am glad I decided to read the series. As I start on the last book, I wish there was another book in the works.

listening to Ray Chase is like trying to watch your favorite action movie with a Kenny G sound track.

Why didn't she use her gun?

Every male chauvinist should read/listen to this story, as they couldn't help but understand why women have complained about their treatment in literature, as brainless bimbos to be rescued by the hero. Chimp (spelt correctly) is so annoying as a person, I wanted our heroine to shoot him in the head before it was half way through. There is no way someone so pathetic and indecisive would ever be someone as special as a paramedic. His desire to save his adoptive daughter is his only redeeming character.
The trouble is. the rest of the series is really good. so don't read/listen to this before the main story, I was so lucky this is how I was introduced to them.