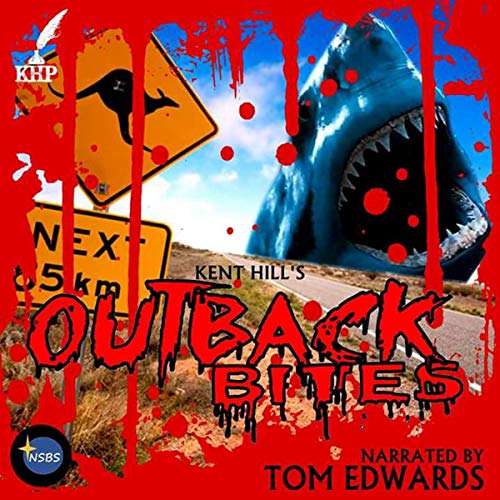 Things that bite are pretty common in the land down under. A predator could be lurking behind every tree, inside every shadow. It is, however, a horrible new menace that threatens the serenity of the vast, sunburnt country: washed inland on a wave of toxic waste, mixed with great white sharks and sleazy topless waitresses. The outback is dry and boring at the best of times...but now, it really bites!

What listeners say about Outback Bites

I had no clue what to expect when I went into this but what I got was something...... odd. I just couldn't get into this at all and wanted to put it aside, but I kept going, and while I did finish it, it was a slog to get through.

I don'y know if the narrator, Tom Edwards, is Australian or not, but he sounded like he wasn't and was putting on the accent. It was tough to listen to and I didn't enjoy it.

Oh, the shark, babe, has such teeth, dear

And it shows them pearly whites, Ya know when that shark bites with his teeth, babe, Scarlet billows start to spread . . . .Traveling in a fried-out combie On a hippie trail, head full of zombieI met a strange lady, she made me nervous She took me in and ate me for breakfast!

Bloody Sheila's running around biting . . . .Sorry, spoilers. Can't tell you too much or I'd ruin all the fun. Wouldn't want that would you. This is where I unveil my love of B-movies to you, because I love cheesy over the top craziness filling my screen on a Saturday afternoon, so I am in heaven when I get it in the form of an audiobook, too. There have been some great B-movie styled books that I would put this beside Zombie Bigfoot and Sharkrantula to name a couple, but Hill just nails that genre so well (See Hercules with a Shotgun for an example). Plus he seems to love sharks, since his other book, the Aforementioned Hercules with a Shotgun also fights Shark monsters.

The take here is kind of like Jaws meets Humanoids from the Deep, and let's face it, Jaws only escaped being a B-monie by the luck of the box office gods. Hill takes us down under, or down undah as they pronounce it, and serves up a bloody and chummy vegemite sandwich. Toxic sludge, nekkid ladies, and great whites combine *ahem* to make for a brutally funny and amazing story. Hill never lets me down as a listener of Audio, his visual depictions are spot on!

Edward's narration wasn't bad, and the accent was decent. I honestly don't know if he was doing an accent or if he is Austrailian, but that is because I don't have an ear for that style except from shows like that Good Place and movies like Crocodile Dundee. The accent isn't the issue, his voice is a little weaker than I'd have liked for the story. Other than that he does a fine job reading and portraying the events in the tale, so I only bumped him one star for his part. Just not manly enough for a bloke fighting fanged terrors.

SO, Hill has struck again, this time with a bloody maw and megaladon sized story set in the deadliest land in the world. The toughest survivalist, i.e. people who make Bear Gryllis look like a three day contestant on the show Survivor, take on the deadliest predators on land or sea. Sheila's with no tops. Like I said, he pulls out all the stops. Get it now. Even though I did receive a promo code for this review it in no way influenced my considerations of the material, and in fact, inspired me to be more honest. Getting a code generally makes me harsher as a reviewer as I am more often concerned what someone like Me will decide based on my review.

I loved the concept of the Shark Sheila’s! The actual build up of the story took a bit longer than I prefer in a story but once the climax of the story hit, the book was freakin amazing! Everything I could ever want in a shark story. Tom Edwards did a great job keeping me engrossed in the story. Overall a shark lovers dream story!

I loved the accent of the narrator. He did a great job with sounding Australian! Jaws meets Crocodile Dundee? Very good story!!

NOT what I had expected...

You gotta love the accent! True, at first, if unaccustomed to Aussie-talk, you’ll need to get used to it. But it sounds great and the accent accentuates the humor. Having said that, the story itself is not what I expected. To be honest, I don’t know what I expected, a traditional shark thrill perhaps...? However, this story is far more surreal – so be prepared for Outback Aussie guys at large, sharknado blowing around you and Shark Sheilas (but I’ll say no more – no spoilers!).
All in all – a surprise.

Take sharks, strippers and beer and you have great movie night with the lads add a smattering of Kent Hill and then you get absolute what just happened this is a must read. but those who have loved and lost or kicked to the kerb maybe better avoid.