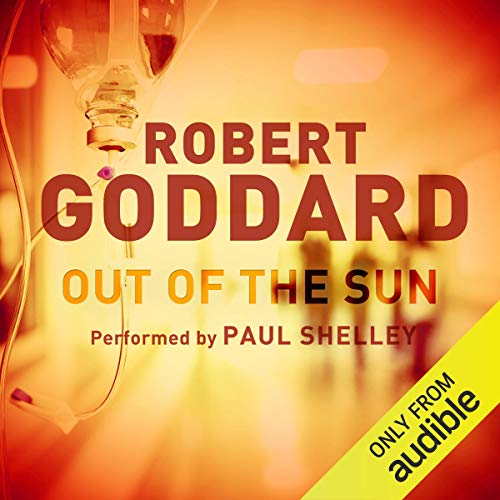 Out of the Sun

By: Robert Goddard
Narrated by: Paul Shelley
Try for $0.00

When Harry Barnett is informed that his son is in hospital in a diabetic coma, he is certain that there must be some mistake, since he does not have a son. But he soon discovers that he does. David Venning was a brilliant mathematician, and his tragic condition is taken to be the result of an accident or a suicide attempt. But his notebooks are missing, and two other fellow employees have died in suspicious circumstances. Coincidence? Or is David the victim of attempted murder?

What listeners say about Out of the Sun

Bungling but brilliant Barnett outthinks them all

Even though Harry Barnett seems a bit more oafish and bungling that he did when he was in Rhodes solving the unsolvable, he pulls this one out of the fire (literally) when the bigger brains could not. It is pure art to see the non-plot evolve into an intricate conspiracy that only the bungler can see or solve.

The only part that was a bit distracting was Goddard's lack of grasp on idiomatic American English. He imbues his Americans with a cruder accent, as would be expected, but they also employ Brit idioms, such as going "to university" or "to hospital", or get "sacked", and they "mean to have done", and "reckon" (when they're not from Texas). They also pronounce "been" like the Brit "bean", and often forget their "Rs". If Americans are really to relate to Goddard's Americans, they need to be more differentiated from the Brits than simply a gruffer and cruder accent.

But that aside, Goddard's books simply unwittingly involve and captivate the reader, much like the hapless Harry Barnett always seems to be drawn into things. This book has a few loose ends, like the ex-lover Iris who doesn't seem to care enough about her and Harry's comatose son and changes moods like most women change clothes. Some of the other characters seem just thrown in, and it is occasionally difficult to figure out why they're there and why we should care. The plot is a bit esoteric and takes a lot of listening closely to scientific theoretical mumbo jumbo, supposedly tied into history and historical figures, but never really fleshes it out in clearly relatable terms.

But, Goddard's books are all worthwhile--the man is a poet writing prose.

I found myself continuing just to know who called

I kept listening because I wanted to know who called Harry to tell him he had a son. I got to the end and realized the caller must have been revealed during one of the many times I zoned out while listening to this book. I didn't bother rewinding to find out.
Definitely NOT one of RG'S best efforts. The storyline felt contrived, and the touch of Sci-Fi introduced felt forced.
Hmmm, when RG is good, he is SPOT ON, but now I'm up to 3 books written by him I felt were no where near as good as the previous ones, so I don't think I will be risking anymore points.
The narrator did ok, his accents were pretty good. I would listen to his narration again.

i say "another fab goddard romp", but i should add that it ALMOST gets too clever. remember reading this in the 90's and loving the read. was well worth an audiobook re-visit.

Despite being a bit if a loser in life and a drunkard, Harry Barnet, in this second instalment of his exploits, manages to dodge arrest and death, yet still manage to unearth evidence of crimes that has eluded others. It’s a real rollercoaster of false clues and double-dealing people that makes for a gripping, if at times unbelievable story. If you know the author’s works you’ll know what I mean by saying it is vintage Robert Goddard. Very enjoyable and well-worth a listen. Even better if you listen to Into the Blue first as Harry’s backstory illuminates this second slice of his adventurous life.
Paul Shelley gives a bravura performance again as narrator.

finished it in 3 days , so kept me going

first time reading this author. really enjoyed the writing and the storyline. will definitely buy another book by this author

Love the twists & turns of Robert Goddard's books and Paul Shelley brings Harry Barnet's character to life brilliantly. Not your typical hero, but you root for him nonetheless. Superb

In truth I hadn’t wanted to start the “Harry Barnett” books as the idea of a series sharing the same character has never appealed to me. I’ve always felt that standalone novels delivered more rounded experiences and left me more satisfied.
Robert Goddard however has such an incredible gift for character development that this was a joy!! It takes the background character from “into the blue” and centralises him in another self sufficient tale whilst brilliantly expanding upon the past for those that know about it.
Easy to get into, hard to put down.. as always!!!
My favourite author without doubt

Super narration. The use of English is absolutely brilliant.Highly recommended. I'm only sorry that I've finished it.

Interesting and enigmatic to the end

The central character is an enigma both capable and self destructively useless.
I like this and that he does not get it all right.
I love the ambiguity about the higher physics.
Very entertaining and brilliantly read.

I have yet to find a single book of his that I have not enjoyed. Everything is here. A not overly-elaborate storyline, with enough twists to captivate and well-narrated at a good constant pace.

Ju st love all his books. He never fails to keep one enthralled from beginning to end.