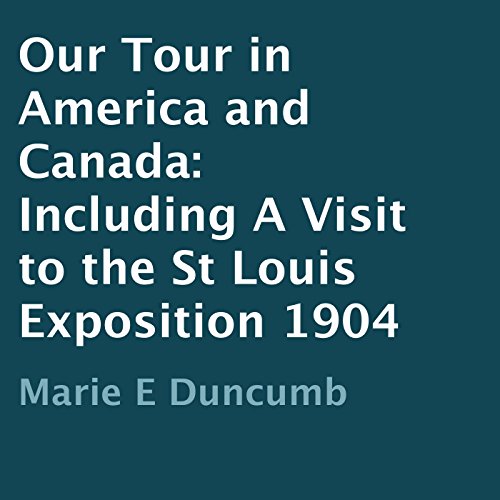 Our Tour in America and Canada 1904

Including a Visit to the St Louis Exposition
By: Marie E. Duncumb
Narrated by: Rebecca Roberts
Length: 2 hrs and 15 mins
Categories: Bios & Memoirs, Personal Memoirs
3.5 out of 5 stars 3.3 (3 ratings)

Our Tour in America and Canada 1904

First written in 1904, the main narrative and text of this incredibly fascinating and rare memoir account - a "travel story" - is by Marie E Duncumb. And like something straight out of a novel, this 110-year-old gem had been hidden away in a chest in the attic of an old country house in Essex, England, until it was recently rediscovered in 2008.

This "First Edition" is exactly that - for it has never been published anywhere in the world before, and you can count yourself among the very first privileged listeners to ever hear Marie's delightful firsthand accounts and experiences of her travelling from London, England, via Kings Cross Railway Station to Liverpool Docks - the boarding of the Celtic and sailing onto New York. The ship was then the world's largest ship afloat and years prior to the tragic sinking of the Titanic. Marie notes: "We were much later than we expected to be getting to Sandy Hook, the cause being that we had to steam a good many miles further south than we otherwise should have done to avoid the icebergs."

This is a short book that delivers exactly what it promises, a report written by a middle-class English woman on a package tour through the U.S. in 1904 to visit the St. Louis Exposition. (Philadelphia, Baltimore, Washington D.C. train trip through Virginia, West Virginia, Cincinnati, St. Louis. Return via Niagara Falls, steamer on the St Laurence, and Hudson River, back to New York).

Listening was worth it to me, just to hear about the Disney World like rides on "The Pike" - the entertainment district of the World's Fair. On the Paris ride for example, guests boarded a submarine, rode underneath the Atlantic Ocean viewing strange sea creatures, rode an elevator to the top of the Eiffel Tower, boarded an airship, flew over the France viewing the cities below, crossed the Channel, saw London from the air, and encountered a storm over the Atlantic on their return "flight". There were rides depicting visits to Hell, and the Garden of Eden. Their was a Filipino Village with over a thousand residents, a ten acre recreation of the Holy Land, a staged battle from the Boer War was fought on a ten acre battlefield everyday, and on and on,

This is an amateur narration and their are many and frequent mispronunciations - quay, embankment, apotheosis, Adirondack for example - but the narration is rapid and easy to follow. Until Chapter 17 arrives. The first five minutes is in completely unedited and raw form. The narrator repeats phrases five and six times to get them right, coughs, pauses, etc. The words lost all meaning with all the repetition, so I just skipped through the worst five minutes of it.