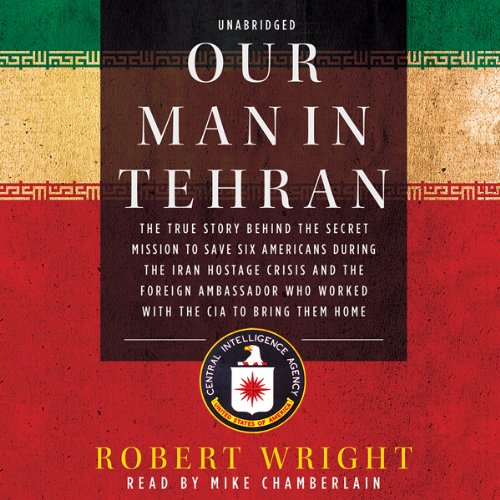 Our Man in Tehran

By: Robert Wright
Narrated by: Mike Chamberlain
Try for $0.00

The world watched with fear in November 1979, when Iranian students infiltrated and occupied the American embassy in Tehran. The Americans were caught entirely by surprise, and what began as a swift and seemingly short-lived takeover evolved into a crisis that would see 54 embassy personnel held hostage, most for 444 days. As Tehran exploded in a fury of revolution, six American diplomats secretly escaped. For three months, Ken Taylor, the Canadian ambassador to Iran—along with his wife and embassy staffers—concealed the Americans in their homes, always with the prospect that the revolutionary government of Ayatollah Khomeini would exact deadly consequences.

The United States found itself handcuffed by a fractured, fundamentalist government it could not understand and had completely underestimated. With limited intelligence resources available on the ground and anti-American sentiment growing, President Carter turned to Taylor to work with the CIA in developing their exfiltration plans. Until now, the true story behind Taylor’s involvement in the escape of the six diplomats and the Eagle Claw commando raid has remained classified.

In Our Man in Tehran, Robert Wright takes us back to a major historical flashpoint and unfolds a story of cloak-and-dagger intrigue that brings a new understanding of the strained relationship between the Unites States and Iran. With the world once again focused on these two countries, this book is the stuff of John le Carré and Daniel Silva made real.

“In this fascinating account of spycraft and compassion, Wright puts newly unclassified documents to excellent use… An absorbing story of genuine heroism and suspense.” ( Publishers Weekly)
“ Our Man in Tehran reads like a Cold War thriller, and Wright is scrupulously fair in his portrayal of Iranians and their motives…an invaluable history lesson.” (Hooman Majd, author of The Ayatollah Begs to Differ and The Ayatollahs’ Democracy)
“Policy makers as well as students of history will find much to reflect on here…Detailed and riveting insight into the difference a few good men and women can make.” (Ryan Crocker, former US ambassador to Pakistan and Iraq and U.S. envoy to Afghanistan)

What listeners say about Our Man in Tehran