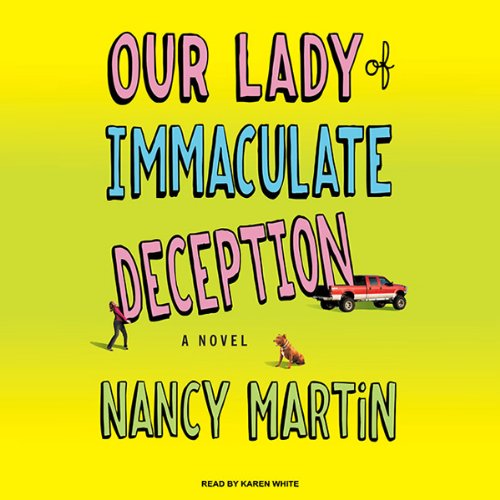 Our Lady of Immaculate Deception

By: Nancy Martin
Narrated by: Karen White
Try for $0.00

Big truck, big dog, big hair. Bad attitude. Roxy Abruzzo, best-selling author Nancy Martin's latest creation is the loud-mouthed, sexy, independent-minded niece of a Pittsburgh Mafia boss trying to go (mostly) straight. She'd like to stay completely out of her uncle Carmine's shady business dealings, though he's trying to reel her in. She'd like to concentrate on the architectural salvage business she runs mostly on the up-and-up for a tidy profit. She'd like to keep her rebellious teenage daughter on the straight and narrow.

But Roxy knows where all the good intentions in the world usually lead, and when she can't help herself from tucking away an ancient Greek statue that's not really hers, she pays for it by getting caught up in the chaos surrounding the sordid murder of the statue's former owner, the heir to a billion-dollar Pittsburgh steel fortune.

Of course, Roxy has plenty of help getting in and out of trouble, including her sidekick, "Nooch" Santonucci, who is too dumb to say no to whatever Roxy wants to do and strong enough to do it; her widowed aunt Loretta, a lawyer whose big hair and short skirts are as big a help to her in court as her brains; and Patrick Flynn, ex-marine, professional chef, and former high school flame, fresh from Afghanistan to torture Roxy, just like old times.

With her wicked sense of humor and a devilishly clever new series premise, the author of the beloved Blackbird Sisters mysteries has crafted another mystery destined to be a best seller.

What listeners say about Our Lady of Immaculate Deception

I couldn't get through this book. I like strong female characters but it annoys me when they are so strong that they are unrealistic.
Plus: She has an unconventional job as a salvage collector, she is a strong independent woman who doesn't let men get in her way.
Minus: She is such a beautiful woman that every man in Pittsburgh wants to get in her pants, she is so strong that she feels the need to beat up any man who gets in her way, her promiscuity was out of place in the novel. She is also a bit of a hypocrite when it comes to her own daughter's sex life.
It seemed as if the author thought it would make Roxy more likeable if her flaws were exposed in an unapologetic way. It only made her unlikable. The rest of the characters are one dimensional and I don't remember anything about them. If there is another book in this series, which it seems there will be, I will not be buying.

Great adult story. Like the characters and plot was good. Just wish sex was a little less descriptive.

What would have made Our Lady of Immaculate Deception better?

Better narrator. Couldn't get past how they were playing out the characters. Story might have been received better if narrator was better.

Has Our Lady of Immaculate Deception turned you off from other books in this genre?

No. I know there's definitely better out there.

The character voices all seemed wrong. Was very hard to listen to.

What character would you cut from Our Lady of Immaculate Deception?

After trying to listen to this book, trying to give it a chance for so long, it's completely turned me off this narrator and makes me afraid to get more books like this. Excruciating.