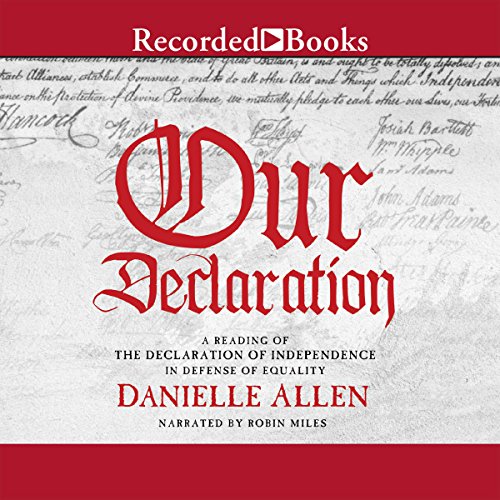 By: Danielle Allen
Narrated by: Robin Miles
Try for $0.00

In just 1,337 words, the Declaration of Independence changed the world, but curiously it is now rarely read from start to finish, much less understood. Unsettled by this, Danielle Allen read the text quietly with students and discovered its animating power.

"Bringing the analytical skills of a philosopher, the voice of a gifted memoirist, and the spirit of a soulful humanist to the task, Allen manages to find new meaning in Thomas Jefferson' s understanding of equality," says Joseph J. Ellis about Our Declaration. Countering much of the popular perception, she restores equality to its rightful place, detailing the Declaration's case that freedom rests on equality. The contradictions between ideals and reality in a document that perpetuated slavery are also brilliantly tackled by Allen, whose cogently written book is a must-listen "for all who care about the future as well as the origins of America' s democracy" (David M. Kennedy).

What listeners say about Our Declaration

What made the experience of listening to Our Declaration the most enjoyable?

The narrator read slowly, but given the weightiness, depth, and complexity of the material, her pace was necessary. She did an excellent job, and was an excellent choice to read this book.

This is the second most interesting book I have ever read. It gives in-depth historical, etymological/philological, and historical background for the Declaration of Independence, but it is primarily a work of political philosophy. Allen does a fantastic job keeping it highly personal and practical. She argues that the Declaration is one of the most important documents in American politics/political history, and that it has been and is being misread in the current political landscape. It changed my political outlook on our contemporary situation, and I buy her extremely well-reasoned argument.

However, I cannot remember reading a more intense book, a book that required all of my concentration and nearly all of my (not inconsiderable) intellect. I first acquired it as an Audible (audio) book, but I had to buy it so that I could listen and read it at the same time. It was worth every penny, every minute, and every bit of energy.

Like many of my generation I just never have taken the time to read Our Declaration but now in my seventy fourth year I have to say it's been very enlightening.

Essential reading for every American

This should be essential reading for every American student. It can get overly analytical and intellectual in the semantic arguments but it's not wrong either.