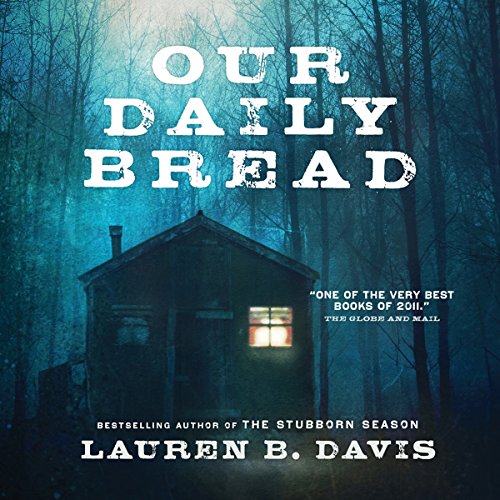 By: Lauren B. Davis
Narrated by: Damhnait Doyle
Try for $0.00

A novel about what happens when we view our neighbours as “The Other” and the transformative power of unlikely friendships, Our Daily Bread is inspired by the true story of the Goler Clan of Nova Scotia.

The Erskine Clan, long shunned by the people of Gideon, live in secrecy and isolation on North Mountain. For generations, the clan’s children have suffered unspeakable acts of abuse, incest and psychological torture. The intolerant, self-righteous Gideonites decline to intervene, believing their neighbours to be beyond salvation. Yet in both groups, nearly everyone has secrets, and nothing is as it seems.

Twenty-one-year-old Albert Erskine dreams of a better life and explains to his new friend, Bobby Evans, a teenager from town, the meaning of the “man’s code”: “You keep your secrets to yourself and you keep your weaknesses a secret and your hurts a secret and your dreams you bury double deep.” Bobby’s eight-year-old sister, Ivy, suffers from incessant bullying by her classmates. Her father, Tom Evans, a local bread delivery man, struggles to keep his troubledmarriage together. As rumours and innuendo about the Evans family spread, Ivy seeks refuge in the company of Dorothy Carlisle, an independent-minded widow who runs a local antiques store. When Albert ventures down from the mountain, he sets in motion a chain of events that changes everything.

Damhnait DoyleNewfoundland native Damhnait Doyle has released seven full length albums. She has won a handful of East Coast Music Awards and has been nominated for Junos both as a solo artist and with the band "Shaye". Creative on all fronts, Damhnait has written songs for television shows, other artists , she has directed videos, released a book and for four years wrote a weekly newspaper column. She is currently recording the second album with her band, the CCMA nominated "The Heartbroken".

What listeners say about Our Daily Bread