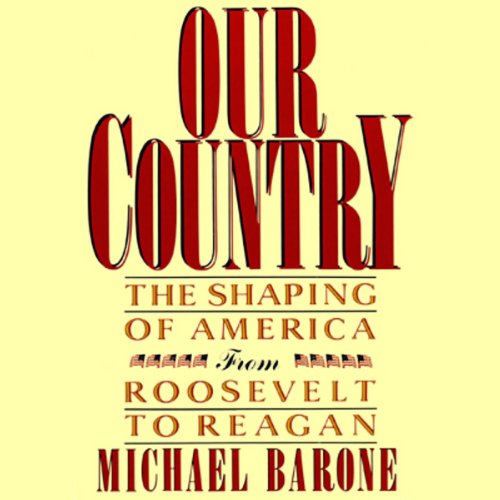 By: Michael Barone
Narrated by: William Lavelle
Try for $0.00

In this rare, sweeping history, Michael Barone draws from deep within the political and social record of modern America, from election returns, political polls, news reports, census extracts, and statistical abstracts, to tell the story of how the country of our parents and of our grandparents became our country.

Barone's account of the rise of the prosperous and powerful nation which we know today points out that the single most significant issue to dominate American politics in this century is that of who really is an American. Gone are the vaunted battles over the distribution of wealth and income. In their place are the powerfully rooted political battles fought between America's cultural poles: its racial and ethnic groups, its urban liberals and small town conservatives, its state's rightists and centrists, and ultimately also between advocates of culturally diverse positions and lifestyles.

Besides his extensive knowledge of the historical record, his portrayal of individual participants, from FDR and Ronald Reagan through labor leader John L. Sullivan and civil rights leader A. Philip Randolph, adds color and dimension to the narrative as it moves into contemporary times.

What listeners say about Our Country

A MUST for social science majors!

If you are studying to any social science major, this audiobook will give you the extended history of politics and government. Not just the ordinary run down of presidents and famous senators, but it explains the behind the scenes aspects of government and the real story about how certain policies came to be.

The author also draws many of his conclusions from a heavy reliance on contemporary statistical polling results, without examining the wording of the polls themselves. Of course this is a very error prone approach, since the wording of a poll usually drives the outcome.

Glossing over historical events that don't fit his bias, the author weaves an interesting tale, but as is typical of historians of his era, reaches conclusions that do not stand the test of time and unbiased scholarship.

The narrator is so conspicuously awful that you would be better off buying this in print. His prissy intonation, noisy swallowing, and constant mispronunciations (Rooooosevelt, Illinoyz, kooort for court, etc.) are highly distracting.