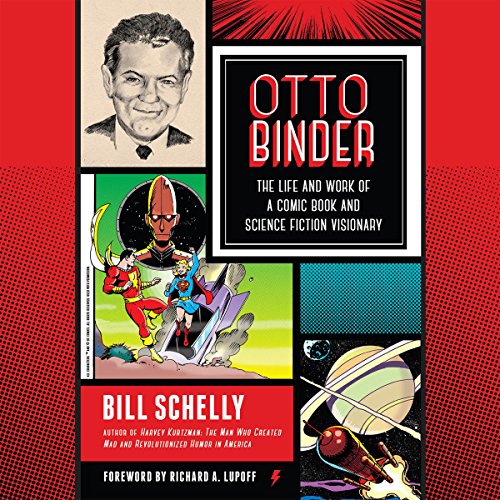 By: Bill Schelly,Richard A. Lupoff - foreword
Narrated by: Derek Botten
Try for $0.00

Otto Binder: The Life and Work of a Comic Book and Science Fiction Visionary chronicles the career of Otto Binder, from pulp magazine author to writer of Supergirl, Captain Marvel, and Superman comics. As the originator of the first sentient robot in literature ("I, Robot," published in Amazing Stories in 1939 and predating Isaac Asimov's collection of the same name), Binder's effect on science fiction was profound.

Within the world of comic books, he created or cocreated much of the Superman universe, including Smallville; Krypto, Superboy's dog; Supergirl; and the villain Braniac. Binder is also credited with writing many of the first "Bizarro" storylines for DC Comics as well as for being the main writer for the Captain Marvel comics. In later years Binder expanded from comic books into pure science writing, publishing dozens of books and articles on the subject of satellites and space travel as well as UFOs and extraterrestrial life.

Comic book historian Bill Schelly tells the tale of Otto Binder through personal letters and interviews with Binder's own family and friends. Schelly weaves together Binder's professional successes and personal tragedies, including the death of Binder's only daughter and his wife's struggle with mental illness. A touching and human story, Otto Binder: The Life and Work of a Comic Book and Science Fiction Visionary is a biography that is both meticulously researched and beautifully told, keeping alive Binder's spirit of scientific curiosity and whimsy.

"Bill Schelly has done an amazing job of capturing Otto and his family and friends, and explaining in an interesting way why his work was so important and precedent-setting." (Michael Uslan, executive producer of The Dark Knight Rises)
"Otto Binder was a kind of titan, a precursor of the gods ...because he came up with basic primordial forms that later writers would perhaps polish to a greater luster. But Binder hewed them out of solid rock. He was mining the raw material." (Alan Moore, author of Watchmen and V for Vendetta)

What listeners say about Otto Binder

This is a very entertaining book. It was given to me as a gift, because I'm a fan of the Supergirl TV show. According to Schelly's book, Binder created her in the comic books he was writing for DC. Binder was a pretty fascinating guy, it turns out. You don't even need to be a comic book fan to enjoy this biography. It's well-researched and written,and even tugged at my heart strings!

Plus the narrator does an excellent job. highly recommended!

A Touching and Interesting Story

A lot of Otto Binder's work (the Golden Age Captain Marvel, lots of his Silver Age Superman writing, his Adam Link Robot stories which became the basis for my second-favorite episode of The Outer Limits) meant something to me before I read this book, I knew nothing about his life.

Now I do, and it made me both smile and cry a bit: he experienced some big tragedies and difficulties.

His origins, his family and his close relationship with his brothers, how he started writing, first in the pulps, the then in comic books, then writing about space for NASA, among others, his books and articles on science and "pseudo-science" (what might be called "psychic phenomena", UFO stuff, etc)... All covered here.

But also his friendships, his working relationships, his family life all come alive.

While the reader is not the best I've heard, he does a very good job.

This well told biographical account of Otto Binder was very insightful and informative. It gives a greater understanding of the history of pulps and comics in the beginning and how they evolved as well as Otto’s role in all of it. The narration is superb.

A great history of one of the best comic authors of the golden and atomic age of comics.

Good listen, Otto's story is very interesting i have a lot of words left to write