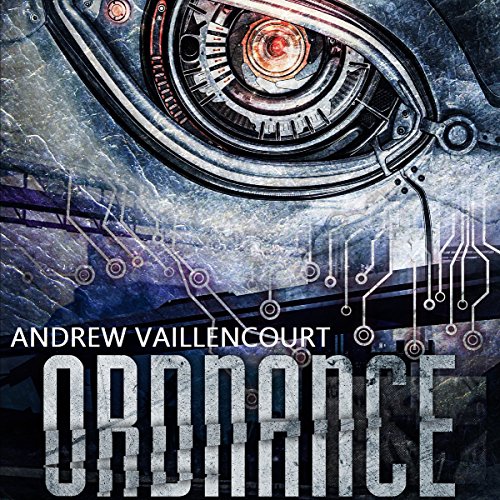 By: Andrew Vaillencourt
Narrated by: Jay Ben Markson
Try for $0.00

The aging cyborg had never really recovered from being betrayed and enslaved by his superiors in the Army, and the final insult of being permanently classified as "defunct military ordnance" had been a bitter pill to swallow. Now, he spent most of his time drinking beer and working as a fixer for the crime families in 25th-century Boston. It was easy money if you were the kind of guy who was bullet-proof and could pick up a house.

But then Lucia Ribiero stumbles into his favorite watering hole dragging a squad of bounty hunters behind her. Shadows from his own dark past, and old debts still unpaid conspired to drive the old war-horse out for one more mission. Like any good soldier, the mission is all that matters for Roland. Linked by a shared connection to her kidnapped father, the duo will face veritable armies of criminals, mutants, cyborgs, and corporate executives as they search for the missing man. The secrets of the Ribiero family take center stage as they approach the center of the labyrinth, and Lucia's mental and physical issues present an even deeper mystery than her father's disappearance.

Roland will have to face the horror of his past one more time, and Lucia will need to get a grip on her future if they expect to survive a running battle with an entire galaxy's worth of mad science gone awry; and ultimately prevent a terrible history from repeating itself.

What listeners say about Ordnance

same vain as Hard Luck Hank but without the comedy

Fairly decent story, but the narration is where this books shines. Markson does an amazing job of drawing you into the characters and world. definitely recommend.

So glad I found this series

Creative story, lots of action and intrigue, and I laughed out loud too. The Narration is was amazing. I highly recommend this book to anyone looking for a new series to read.

Great book! I enjoyed the story and the performance very much. Felt like our old R.Talsorian Cyberpunk games. Anticipation of Cyberpunk 2077 currently red-llining! ;)

a different breed of cyberpunk

This story flew by , with the pacing of a Raymond Chandler story, and the violence of an episode of Heavy Metal . The reader was quick and clear and had a fair range of voices in his repertoire. The characters were nicely multi dimensional , surprisingly so in many cases. The villains were fun and the allies surprisingly varied, give this one a shot you'll be pleased.

When I bought this book it didn't have a lot of reviews so even though it had a good rating I didn't fully trust it. The only reason I bought it was because it was recommended from a different author who I like. So I came into this book with kind of low expectations. So when I found myself really enjoying this book it was a pleasant surprise.

This is a fun story and it breaks the mold for the traditional Sci-Fi military book. I definitely recommend it.

I thoroughly enjoyed this one. A good balance of character development and action. I am hunting for the next book in the series.

Let me start by talking about Jay Ben Markson's performance. If you're like me and you listened to the preview snippet, you may have found his narration to be rocky and crackly to the point where it sounded like it was going to fall apart. This almost kept me from ordering this book. But Mr. Markson's performance turned out to be really quite good. He has good pace and emotion, and he does a good job with the characters.

While very enjoyable, the story itself is nothing revolutionary. It's a straightforward actionfest with a linear and fairly predictable path. But like I said, it's enjoyable. And while the character development may be a little on the light side, it's enough for me to care what happens to them and to be curious to move onto the next book to see where this goes.

If you're looking for a fun way to keep the mind occupied for 10 hours without taxing it too much, this is a good choice.

Great Story, a must listen to or read.

right from the start Andrew paints futuristic picture of a new world. characters are given Dynamic and unique personalities. I like how the point of view switched and told the story through different eyes.

I'm a fan of good verbal delivery and 'performance' but I also like witty writing and some good tech. This definitely meets all those criteria. It's definitely got a chandleresque feel, both in the urban setting and the language and even the age of the central character, grizzled rather than young and glib. I was expecting the story to be quite simple, which it is but it's told in a lovely pithy way that gives some nice detail. And it does fair bounce along. I don't give top review marks easily but here I have. The narrator is great too. Really good read.

What's a human tank meant to do when a woman walks into his bar and turns his very well maintained life of violence, fixing and isolation upside down. An ex-military experiment called upon by a man he owes everything to look after his daughter.

Breach, aka Tankowicz, a man who isn't even seen legally as human anymore but decommissioned ordnance, wakes up from his fugue of existing to battle old demons, flex muscles and show the Darkside, the Combine and the big Woo, why it's best to let sleeping Golems lie.

A must for anyone who likes good sci-fi and dialogue, with levity and humour thrown in.